by Mike Ferman of Tackle ModZ 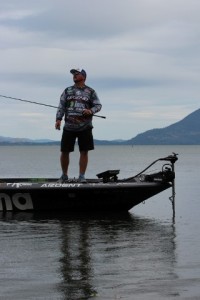 All the talk of ledge fishing in the bass world lately has my mind all juiced up, as happens every year around this time! As spring turns to summer and most of the last groups of largemouth bass throughout the country have moved off away from their spawning flats, they begin their journey to deep water. One key place they begin to gather in large schools is ledges, or steep breaklines on main river channel.

Fishing these areas has become the main pattern for most anglers on some bodies of water they are not just an option, but the only option. They have become an absolute requirement if you want to cash a check in even a local weeknight derby.

I thought it wise to give Elite Series Pro Fred Roumbanis a call so I could share with you what he had to say on the topic. Since Kentucky Lake; the site of the Bassmaster Elite Series BASSfest, is one of those lakes where ledge fishing plays a major role. I asked Fred to give us his overall take on the subject and how he applied those tactics in practice and during competition on Kentucky Lake. What developed is a relatively simple yet effective system for finding and catching those schools of ledge fish. The approach netted the Oklahoma pro a fifth place finish and a $21,000 payday.

“It starts with how I practice,” said Roumbanis. “Most people think you wanna get your rod in the water and start making casts, but it’s the opposite. I drove around for two days with my electronics on looking for those schools before tried to catch anything. When I did it was a four pounder and I knew I was doing the right thing right away.”

It’s those electronics Roumbanis spoke of that play a large factor here. “That Garmin PanOptix is amazing, you can literally see the fish,” he said. “I just point my trolling motor one direction or the other to scan and I can easily line up so I can make just the right cast through the school or at a piece of structure.”

He began by heading far up a creek in search of untouched fish that were in the post-spawn transition. In the back of the creek he found a large stretch of spawning flats and began making his way back down the creek. He continued towards those ledges on the way to deep water scanning with his sonar for large schools of fish. “If there weren’t fish there I wasn’t interested, with this type of fishing it’s a numbers game,” he said. “If you find the right group of fish it can be lights out and quickly.” 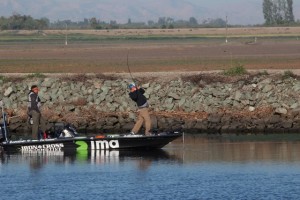 He said that the fish seek to be unmolested. “They didn’t look like they had seen a hook all year,” he added. “I try to find and focus on areas away from the main river or lake, these areas not only get less pressure but are less effected by things like current or if they’re pulling water or not. On these bodies of water where they pull water for power generation that’s a really important factor, and I’d like to avoid having to account for it if possible. You can’t always plan for if they are going to do it or not and whether or not they pull water that day can make or break your tournament without your control.”

When Roumbanis finds the schools he’s looking for he utilizes a variety of baits in a two-step process for a one-two punch.

Step #1 – Fire those fish up
He said he works to get the school in a feeding mood. “The very first thing I’ll do is drift beyond the school and stay back a ways so I don’t spook them,” he said. “Then I point my trolling motor back at the school and scan through it to pick the right cast I think will get them turned on and in a feeding mood.” He said he needs a response fairly rapidly to sit on them for a while. “I have to be able to turn them on pretty quickly otherwise they weren’t worth my time,” he said. “But if they wanted to eat I could keep feeding ‘em my lure.”

When I asked him what he was using to turn the fish on he answered, “I throw a variety of baits when ledge fishing. The thing about the ledge bite on Kentucky Lake is I’ve seen it change from a deep diving crankbait; like the ima Beasthunter, bite to more of giant spoon and big swimbait bite over the years, so I throw more of that stuff there now.

He described the progression of his lure choices. “I usually will start with one of those giant flutter spoons you are starting to hear about more now. Or a 7-inch OptiShad Swimbait by Optimum,” he said. “I also like either a 3/4 to 1-ounce Pepper Football jig with a Gene Larew Biffle Bug or Rattlin’ Crawl’r as a trailer, or my signature series Boom Boom Plus in the same size, which has a blade on the back.”

He said he uses a fast pace to excite the fish. “I fish the jigs very fast through the school to try get ‘em fired up,” he said. “I can also use the big spoon or swimbait to trigger them as well, but once I get them fired up, it’s on.” 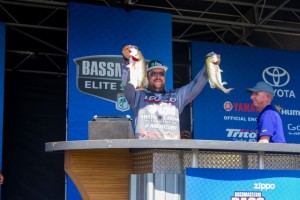 Roumbanis witnessed how fast a feeding frenzy can happen when you’re on the right school on day one at Kentucky Lake, “I had about 18 pounds by seven o’clock using my Optimum swimbait and a big spoon,” he said. “The hook up ratio on the big spoon wasn’t great but it would definitely get them going. Then I would finish them off with the swimbait on a one-ounce jighead.”

Step #2 Catching ‘em & keeping ‘em fired up
He talked about the importance of keeping the school agitated. “Once you get them in a positive feeding mode it is important to keep them there,” he said he used two baits to do so. “I was also throwing something a little different; a 3/4 or 1-ounce Scrounger with an Optimum Victory Tail. I could work that down through the school and that shimmy and shake would drive the fish nuts.”

As for what he would do if the fish shut down and he couldn’t get them fired back up in short order the answer was both expected and clear. “I’d head to the next school and repeat the process,” he said. “This pattern isn’t so much about being in the right place at the right time as it is finding the right fish in the right place at any time.”

As for rod and reel choices Roumbanis likes to keep it simple, choosing to use the same gear for each lure, “I throw the big spoon on the iRod Air 775 Heavy with 20-pound-test fluorocarbon on a 6.5:1 Ardent Apex Magnum,” he said. “For everything else I pretty much throw it on one set up, my signature series iRod called Fred’s Magic Stick – It’s a perfect rod for these techniques. It’s also a 7’5” heavy with an Ardent Apex Elite series reel spooled with 20-pound-test fluorocarbon for the rest of the baits I’m throwing in these ledge situations.”

Roumbanis believes in keeping it simple when ledge fishing. “I try to keep the deck organized and just keep the rods I need on out,” he said. “You have to move fast in order to capitalize on the school being fired up, but if you can move quickly and efficiently, you can fill the boat with heavy largemouth.”