Hard to believe another week has come and gone. Iâ€™ve had two train wrecks in a row, first the Bassmaster Open on the James River where I finished 51st and now the Pickwick Lake FLW Tour Major where a scored an awesome 71stâ€¦Oh yeah! Iâ€™m not real happy with the way things have been going over the last month, especially since Iâ€™ve literally been on winning quality of fish and just canâ€™t get thing to go my way.

At the James I was in the same tiny creek with the winner and on the exact same pattern, but just couldnâ€™t get my big bites in the boat for some unexplainable reason. Well I cant really say that, I did get one big bite in the boatâ€¦Meow!!! At Pickwick I needed a better boat draw and a top 20 was going to be a piece of cakeâ€¦literally. The guy that got my spot first weighed almost 19 pounds on day one. Bad breaks and my mind on other things, like selling our house, have really been affecting me. I havenâ€™t been focused nearly as much on fishing and I can feel it hurting my performance. 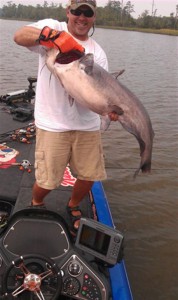 I have next week off and should be going home to spend the last week off before our house closing moving furniture, but Iâ€™ve decided just this morning to head straight to Lake Ouachita, AR. The Forrest Wood Cup is about 3 weeks away and thereâ€™s one more week before our off-limits period, so Iâ€™m going there with 100% focus on winning this dang championship. Iâ€™ve been so close 3 times now, this will be my 9th consecutive championship and I think itâ€™s time to bring the trophy back to PA! Iâ€™ll be rooming with Randall Tharp this week in Arkansas, hopefully some of his luck will rub off on me, heâ€™s been red hot.

My next event will be the Cup and then off to the second Bassmaster Northern Open on Lake Erie out of Sandusky Bay. These are my two biggest events of the entire season back to back. If I win the Open I make the Classicâ€¦dumb?…yes, but Iâ€™d sure love to take advantage it. I will be gambling big time on that one, making an incredibly long run somewhere, you can bet on that. Itâ€™s hero or zero timeâ€¦hopefully that big ocean doesnâ€™t swallow me up. It scares me to even think about, who knows maybe Iâ€™ll spend the night on an island somewhereâ€¦been there before, lol.

Talk to you all next week!