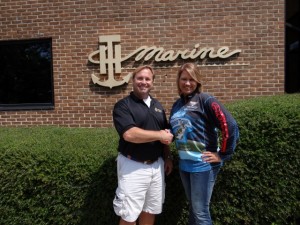 Decatur, Ala. – The Alabama Bass Trail announced today that T-H Marine Supplies, a leading boat parts and accessory manufacturer, will be a presenting sponsor of the new Alabama Bass Trail Tournament Series set to launch in 2014.

During the tournament series, T-H Marine Supplies will supply its trademarked OxygenatorTM and G-Juice Live Well Treatment where they will be used in the water weigh-in system to assist in a 100% live release of fish back into their habitats at the conclusion of the tournament. The OxygenatorTM uses a patented process to create 100% pure oxygen from the water itself by separating the water molecules into their elemental parts: hydrogen and oxygen. The lighter hydrogen molecules rapidly leave the water and dissipate into the atmosphere. The heavier oxygen molecule remains suspended until it dissolves in the water. The G-Juice formulation was developed from over 15 years of research spent in the baitfish, fish transporting, and sport fishing industries.

“T-H Marine is really proud to partner with the Alabama Bass Trail Tournament Series. Alabama is not only the Heart of Dixie; it is also the heart of bass fishing. I am proud of our state for the efforts being taken to grow and care for bass fishing. Since we are Alabama born and bred, it was a no brainer for us to want to support such a great tournament trail,” said T-H Marine’s President and CEO Jeff Huntley.