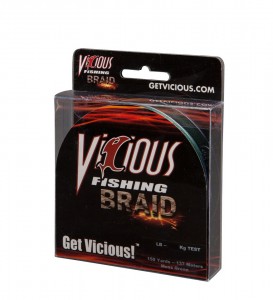 PELL CITY, AL – Vicious Fishing will be taking a major step forward in the braid category at the upcoming ICAST show when it officially relaunches Vicious Braid. The new moss green braid bolsters much better handling and castability than its predecessor while also delivering a much lower line diameter – as much as 75% smaller in some SKUs.

Much of the improved manageability is due to the increase in the number of carriers used on the higher lb. test lines. The new braid features eight carries on the 65lb test and up, which keeps the product round allowing it to leave the reel more freely. Another added benefit is the price. The new braid could easily carry a retail price of $10.99 for 150 yards of 10-100 lb test and still allow dealers to maintain significant margins.

“After several months of testing, we decided that the time was right to make the move on a new braid. Not that our old braid was bad, but the new stuff delivers on so many key points to the anglers that use braid regularly – thinner diameter, better castability and high abrasion resistant. Add in the affordable price and we have a winner” exclaimed Greg Meunier, Vicious VP of Sales Marketing.

Meunier added, “The feedback from our tour pros included statements such as ‘light-years better’, ‘worthy of a name change’, and ‘you have a winner’, we knew we had done something right. We hope the trade and angling community will take another look at Vicious Braid.”

By offering premium fishing line, baits, eyewear, apparel and other angling products,
Vicious was inspired by the everyday angler. Today’s angler deserves quality, durability and reliability in their gear and Vicious delivers all of that with an attitude. Vicious headquarters are located in Pell City, AL. For more information regarding Vicious and its family of products, visit Get-Vicious.com or call 866-645-0024.