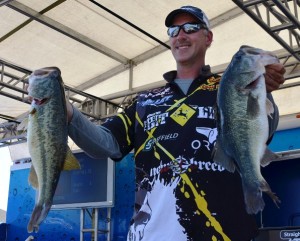 It seems a little early to be saying this, but the final event of the 2013 FLW Tour is upon us.  As fishing fans of the world crack our eyes to the morning sun, stretch, hit the snooze button and try to ward off the impending start of the morning, the battle for the FLW Tour Angler of the Year and the coveted slots in the Forrest Wood Cup will have commenced.

There is certainly going to be a lot of drama unfolding outside Chattanooga this week, and we thought we’d take a look at some of those, and give our opinions as to how things might shape up.  We’ll take a look at Lake Chickamauga’s FLW tournament history and see if we can give some ranges for the weights this week

Angler of the Year
Because the final event is going to be held on Lake Chickamauga in Tennessee, and it poses some interesting questions for the outcome of the Angler of the year title.  The first contributing factor is that current AOY leader, Andy Morgan is from Dayton, Tenn., which is less than 40 miles from Chattanooga. 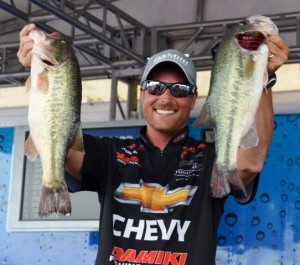 Morgan’s proximity to the waters would seem to be an advantage for him as he starts the event with a nine point lead over former AOY Bryan Thrift.  But, the home field advantage is not always a guarantee. In his last three FLW events on Chickamauga, Morgan has finished 28th in the 2011 FLW Tour stop, 25th at the 2010 FLW Series stop there, and in 2005, he finished seventh in a BFL event on the lake.

Thrift has fished two events there fairly recently.  In 2011’s Tour event, he finished 65th, but in the 2010 FLW Series event, he finished 10th.  Does this mean that either angler will be better this week?  Not necessarily, but it looks like Morgan has a tendency to be more consistent on the lake.

Of course, mathematically, any angler who is within 100 points of Morgan still technically has a shot at winning the Angler of the Year crown this year due t the FLW field size.  However, the truth is that the top five anglers are the ones with a real shot at leapfrogging the rest.  While Thrift is nine points behind Morgan, Jacob Powroznik is only 19 points behind, Brent Ehrler is 23 points back and Stetson Blaylock is 32 points behind Morgan.  After that, there is another 17 point gap between Blaylock and Jason Christie.

In actuality, the contest is truly down to one of the top four, because with the proven talent in those anglers, it’s not likely that all four of them will fall flat.

Our hunch is that Morgan; the angler with the most top 10 finishes in FLW history with 54 top 10’s, will perform well enough close to home to close it out.  However, this is a TVA lake, and a lot of these anglers are well versed in these conditions.

How is Chickamauga Fishing 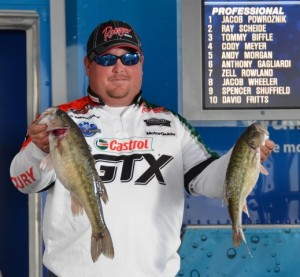 From the sounds of the interviews FLW reporter Rob Newell has been conducting, it sounds as if the majority of the field is finding the fishing to be different than what they expected.  Anglers expect to come to a TVA lake in the summer, and they expect to time the current and fish ledges.  While that will still largely be the key, it sounds as if the anglers are not finding the quality that they would have expected this time of the year.

With the weather in the spring and early summer wreaking havoc all over the central and southern parts of the country, the stages of bass migration seem to be off a bit everywhere.  Anglers that have spoken about their practice largely say that the quality of fish is off on structure, but those that have gone shallow have yet to find the kind of quality they would like to see in order to commit to the skinny water.

But, these are the major leagues, expect to see several 20 pound limits come to the scales the first two days.  then expect to see the quality begin to fall slightly as the event grinds on.  Chickamauga receives a lot of fishing pressure throughout the year, and with this much concentrated pressure, it could be  lighter weight affair than many consider.  Right around 42 to 44 pounds could be leading the event at the first cut, and just under 15 pounds a day should get n angler a $10,000 check.

Other Stories to Watch
While the Angler of the Year race will be the priority story this week, there is the matter of qualifying for the Forrest Wood Cup on the Red River in August.  With the top 35 pros automatically qualifying, and the fact that there are currently four anglers who have already qualified in the top 35 spots, that means that 39 pros should be a lock to get in to the 2013 Forrest Wood Cup. 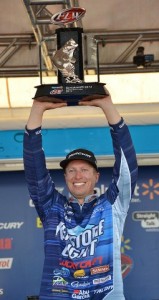 Can Brent Ehrler Win the Only Title that has Eluded Him? – FLW Brett Carlson

There is a chance that it could fall to 40th place as well.  Dave Lefebre; currently in 42nd place in the standings could move up, and if he does, the qualifying number would slip to 40th place.  Of course, one or more of those double qualified could slip out, but the nearest to the cutline is David Dudley at 22nd place, and we don’t see that happening.

There is the matter of the two tour pros.  It looks like Christie, who currently sits in sixth place in the points will be the first to qualify for this year’s Forrest Wood Cup, and by nature of his win at bull Shoals on the Elite Series, is already qualified for the 2014 Bassmaster Classic.

Fred Roumbanis is another angler with a shot at both championships.  While he starts today in 45th position, he is 167 points from the cut point threshold.  If Roumbanis can finish in the top 30 here, he should make the Forrest Wood Cup, then, focus on the Elite Series, where he is in 23rd with two events to go.

Either way, there is a lot on the line this week on Lake Chickamauga, and it should be a good one to watch. Follow it at www.flwoutdoors.com.