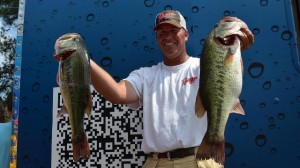 DAYTON, Tenn. (June 27, 2013) – Ledge-fishing was the name of the game Thursday as Randy Haynes of Counce, Tenn., brought a five-bass limit to the scales weighing 23 pounds, 8 ounces to take the lead after day one of the Walmart FLW Tour at Lake Chickamauga presented by Chevy. Haynes holds a very slim 1-ounce lead over Dan Morehead of Paducah, Ky., heading into the second of four days of competition in the tournament that features the world’s best bass-fishing anglers casting for the top cash award of up to $125,000.

“I caught around a dozen keepers today,” said Haynes, who was earned a victory earlier this season at the FLW Tour event on Lake Eufaula. “A lot of them were pretty small, though. The smallest fish that I weighed in today was 3 pounds, which was kind of disappointing considering I had three over 5 (pounds).”

Haynes said that he was fishing around 20 different areas, and rotating around to them throughout the day.

“I think that the areas that I am fishing are all obvious,” Haynes said. “It’s real crowded out there. I don’t know what I’m doing differently. I’m just doing what I do.”

Haynes was not ready to divulge his specific baits or the depths that he was targeting. He did say that a few times throughout the day he would have a two or three fish flurry, but that his bigger bites were coming at random times.

“This one is going to be a tough tournament,” said Haynes.

Coming into this tournament, many pros thought that drawing an early takeoff number in the pre-event boat draw would be a key factor. Haynes did not believe his draw had any effect on his day.

“I was boat 54 today. I’ll be boat 90 tomorrow. It really didn’t matter too much,” Haynes said. “Everyone took up the good areas first thing this morning. I think that it’s best just picking one here, one there. I’ll be doing the same thing tomorrow.”

The top 10 pros after day one on Lake Chickamauga are:

Day won the 3M ScotchBlue Big Bass Award on the pro side Thursday with a fish weighing 8 pounds, 13 ounces, worth $500.

Anglers are also vying for the prestigious 2013 Walmart FLW Tour Angler of the Year presented by Kellogg’s title that will be determined by the most points accumulated over the six Tour events in 2013. Coming into this final tournament of the season for Angler of the Year points, Dayton, Tenn., native Andy Morgan held a nine-point lead over Chevy pro Bryan Thrift of Shelby, N.C.

Coverage of the Lake Chickamauga tournament will be broadcast in high-definition (HD) on NBC Sports Network when “FLW” airs Aug. 4 from 11 a.m.-12 p.m. ET. The Emmy-nominated “FLW” television show is hosted by Jason Harper and is broadcast to more than 564 million households worldwide, making it the most widely distributed weekly outdoors-sports television show in the world.