Chip Porché is a 25-year-old Bassmaster Elite Series rookie from Oklahoma, who after 12 years of preparation, goal setting and obsessive dreaming, carried his first bass to the scales yesterday as a pro angler.

It was just that …one bass… four short of the legal limit of 5-daily keepers. But before you rush to judge his first day as a pro a flop, know this, this particular tournament will go down as one of the toughest ever in Elite Series history, and more importantly, Chip is not one bit discouraged.

“I only had one 2 pound 11 ounce bass, and I had to follow Gerald Swindle across the weigh-in stage … that’s a tough act to follow,” said Chip in reference to Swindle’s legendarily humorous stage presence. “Gerald’s one of the guys I’ve looked-up to, but he only had one bass today too.”

When Porché says he looks up to a particular pro, that statement deserves clarification. Actually, he can probably tell you exactly what lure Swindle caught a bass on in a particular tournament nine years ago. Long before studying marketing and communication textbooks while earning a degree from the University of Oklahoma, Chip was consuming Bassmaster and B.A.S.S. Times magazines rich with tournament coverage as a junior high school student in Bixby, Oklahoma.

When most 8th graders were focusing on soccer balls and Nintendo, Porché was re-spooling fresh line on his reels in preparation for an upcoming Fishin’ Pals adult/youth bass tournament with his dad Paul. The youth trail supported his passion into high school, before he headed to Norman, Oklahoma to form one of the first-ever, of the now very popular, college bass teams in America.

Truly, Chip is one of the young guys the fishing industry needs to thank for pioneering the serious engagement of college students in the sport. But certainly, he doesn’t feel he’s owed that, because in reality, it was just the next logical step in a young life programmed step-by-step to yesterday on The Sabine River. 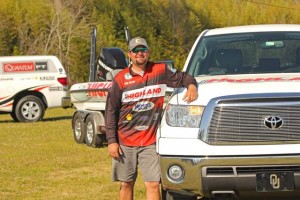 “I wasn’t worried, I was actually calm as I drove into launch yesterday, thinking ‘I’m finally here’. No music. No cell phone calls. I was just thinking and focusing on my strategy, knowing you can’t make one wrong mental decision when you’re competing against this bunch,” said Chip. “My dad does enough worrying for both of us, but I know he’s tickled pink that I’m here.”

In reality, he almost didn’t make it here. After a rough 2011 season in bass fishing’s version of AAA baseball, Chip nearly hit it out of the park the following year in the 2012 Bassmaster Central Opens where he finished 4th in the season’s end point standings, qualifying him for the Bassmaster Elite Series. Here’s the catch – it takes serious coin to play ball with the Elites, and Chip didn’t have a rich uncle, father Paul had no silver spoons to hand out, and no sponsor had stepped-up to support a lifelong dream.

That’s when Tulsa-based US Highland, maker of custom-built engines commonly used by shallow water duck hunters in places like The Sabine River Delta, stepped in like Mighty Mouse to save the day and a young angler’s chance to make a lifelong dream come true. If not for US Highland, Chip never makes it to practice, let alone gameday.

“My first day of practice was solid, but I really struggled the last two days of practice, and with one 2-pounder on Day 1 of the tournament, honestly, I have no idea right now where I’ll head on Day 2.”

And perhaps, it doesn’t matter where he goes fishing today. Day 1 proved it’s tough dang near anywhere a pro can drop his trolling motor on The Sabine. Just getting here was half the battle, now comes the tough part of staying around a good long while. But if there’s ever been a young angler who has done all he can to prepare for a lifetime as a pro … it’s Chip Porché.