Applying Lessons Learned from the Pros

story and photos by Dan O’Sullivan and Mark O’Sullivan

One conclusion that I’ve come to after all of these years of working with professional anglers is that for the most part, they know what they’re talking about. While I have spent a great deal of time working on product-centric how to pieces over the years, I have picked up quite a bit of valuable information that could help catch fish throughout the year. 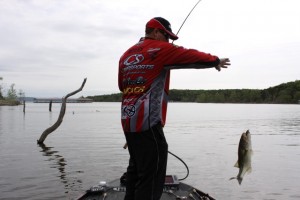 As I’ve documented, my own time on the water over the past two years. Between the breakdown of my outboard, which I talked about in my boat project video series and in writing recently with an article about going fishing with my father at a pond; I haven’t put much of anything into practice.

This past weekend was a day that I could go out. So, I picked up my dad and headed to Lake Oroville, a primarily spotted bass fishery about an hour and a half from home in Northern California. To be honest with all of you, I’d rather fish for spotted bass than any of the other three species, and while Oroville is not known for its magnum sized spotted bass, I’ve caught two of my three spots over five pounds out of the lake and too many four pounders to count there.

Oroville is unique because it has a healthy population of Pond Smelt as a forage base. The Pond Smelt is actually a Japanese fish called Wakasagi that was first introduced into Lake Almanor upstream on the Feather River in 1972, then migrated into Oroville in 1976. Pond Smelt range from a couple of inches long to around four inches for a large specimen, and they are extremely nomadic. They will move vertically in the water column, or go long distances in short periods. 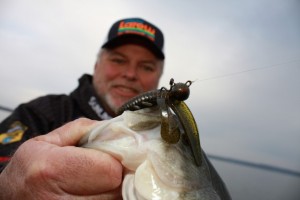 What that means is that Oroville’s spotted bass population will also move – a lot. I fished a tournament at Oroville several years ago where we were catching bass during practice on dropshot rigs, tubes and jigs in 20 to 25 feet of water only to have them not be there the next day following a heavy storm that hit the area overnight. I followed the area out towards deeper water and saw bait balls and arches in 90 to 95 feet of water, but figured that they were deep salmon, so I did not fish for them.

Later that afternoon, at weigh-in, I discovered that the winners had encountered the same conditions, had fished for them, and found that the fish were indeed bass, and would readily strike a dropshot rig. Oh well, lesson learned. I tell you all of that to say that Lake Oroville bass can be doing any number of things on a given day.

Armed with that knowledge, I set up my rods with jigs, tubes, dropshot rigs, crankbaits, jerkbaits and even a castable umbrella rig. being that it is the fall, I started upstream in the North Fork of the Feather River because I figured baitfish and bass might be on their fall migration.

Dad and I had been fishing for a while without a bite in the current. I had gone upstream into the current hoping to find bass chasing and active. The water temperature was in the mid 40’s and there were no bass visible. This is where one of my first “pro driven lessons” came into play. I remembered Tommy Biffle talking about paying attention to the details as he fished in the backs of creeks.

While I wasn’t on the lake the day prior to see water levels, I had a sense that the water was too cold for bass to be active despite the bountiful presence of six to eight-inch Coho Salmon that had recently been planted in the lake. So, I picked up the shiniest jerkbait I had in the boat; an American Shad colored Lucky Craft Flash Pointer 115; which closely matched the silver and blue colorations of the Coho, and quickly moved back downstream to try and intersect with the bass. 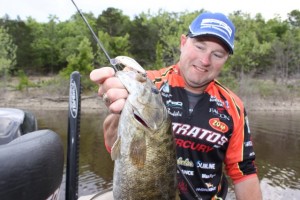 Once we got to the point of the downstream current push; a spot where the water temperatures began to mix and the debris on the surface began to gather, the water temperature started to rise. In 20 feet, the water temperature climbed from 45.6 degrees to 54.8 degrees, and I caught the first bass of the day on the jerkbait. The chunky two pound spotted bass told us that we were getting into the activity zone. Had I not remembered Biffle’s admonishment to pay attention to details, I probably would have spent a lot more time thinking big bass would be in the area with the Coho.

After catching a lot of bass on Strike King KVD Pro Model Tubes on 1/4-ounce Davis Bait Company round ball Shaky Heads and Missile Baits Pinkalicious Drop Craws on dropshot rigs myself, I wanted to find a way to catch a better class of fish. Then I remembered another pro tip that I had received from two different pros about jig fishing.

On separate occasions, Arkansas pros Mike McClelland and Stephen Browning had both told me to fish a jig on the bottom for a better class of fish in the fall when schools of bass were chasing baitfish. So, I picked up a 7/16-ounce Jewel Bait Company Pro Spider Jig and Eakins Craw and made a long cast parallel to the bank.

McClelland and Browning both stressed the importance of keeping the jig in contact with the bottom during colder water periods, so I swept the jig sideways; much like fishing a Carolina Rig, using the rod tip to move the bait, and the reel to pick up the slack. I started getting bites a couple minutes later, and catching a little bit better quality fish than I had been. 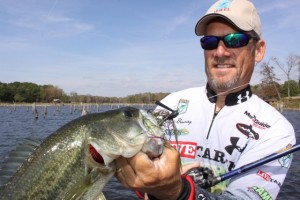 Finally, while working on a piece about long lining crankbaits with Britt Myers, we talked about how individual bass position themselves in ambush positions on the top edge of points waiting for baitfish to move by. Knowing that Oroville can be a productive deep crankbait lake, I had tied a Rootbeer colored 6XD crankbait on my Lew’s BB1 / Duckett Fishing White Ice Byron Velvick Lure Launcher rod.

I was passing a main lake island that had a neck down that led into a backwater bay, and while I was idling across the point, I noticed an arch positioned on the top edge of the point in 18 or 19 feet of water on my fishfinder. I circled back, made a mental note of the location of the fish, set up and made a cast with the deep diving plug. I moved each of the next three casts a foot to the right, to cover the point, and on my fourth cast, got a strong bite. I set the hook and landed a nice two and a quarter pound spotted bass. 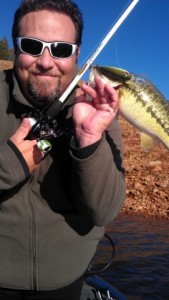 All told, Dad and I caught close to 30 bass between us, and if I hadn’t remembered those tips from pros, we may not have had as successful of a day. I share this with you, not to try and boast about a good day fishing, but rather to try and illustrate how what we do here at Advanced Angler can help us all catch fish. We do everything we can to try and get prime pieces of information from the pros for precisely that reason, and if we try to find a way to put that info into use, we truly can catch more fish, win more tournaments, or have more fun enjoying the sport we love.