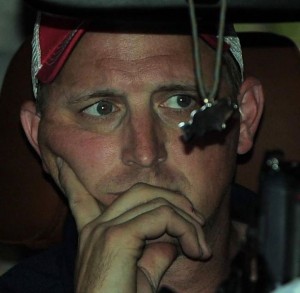 I first met Chris Brown of Rigid Industries at the Elite Series Event on the Delaware River in 2014. I knew of him at the time but had yet to meet him personally. I walked into the expo to check it out last year and from across the other side of the parking lot I could see one booth had more action in it than any other, and that was the Rigid Industries booth. And at the center of the crowd was Brown, talking to potential customers and taking care of one of his professional anglers. I think I knew at that point that if I ever did a feature series like this he was one of the people I had to include in it.

Brown was born and raised in Virginia and started fishing with his grandfather and uncle at the age of four. But with a father who worked for Good Year Tire & Rubber he moved around a lot as a kid; eight times in 15 years to be exact. However, each winter and summer vacation he would return back home to Virginia to fish with his extended family on Jon H. Kerr Reservoir, otherwise known as Buggs Island. At the age of 21 his immediate family moved to Memphis Tennessee, where he bought his first boat. It’s at that point Brown said he truly got hardcore about bass fishing. Shortly thereafter his family had to move again, much to the displeasure of his mother Brown decided to stay in Memphis and start a life for himself.

An auto mechanic by trade, he put himself through college full time at night while working for Strike King Lure Company in Memphis; eventually graduating with a Bachelor’s Degree in Organizational Management. He’d spend nine years at Strike King before moving to the hunting industry for a short time. In 2013 he got the chance to return to the fishing and marine industry when he was hired as the Marine Category Manager at Rigid Industries; one of – if not THE, worldwide leader in led lighting solutions for the marine and recreational vehicle markets. It is a job he truly loves because it allows him to combine all of talents and previous work experiences into one.

Brown currently lives and works in Scottsboro, Ala. on the north end of Lake Guntersville. He has a wife and two great kids, a 10-year-old son and a 7 year-old daughter. When he’s nottraveling one of the tourney trails you can usually find him spending time with his family and fishing as much as possible. A competitive angler in his own right… Brown competes in both the BFL’s and local tournaments when he’s home in Alabama.

Mike Ferman (MF): How did you end up in the fishing industry? 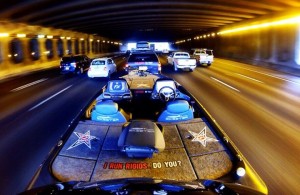 Rigid Industries on the Road

Chris Brown (CB): My wife at the time was taking care of the CEO of Strike Kings’ kids and we had gotten friendly with his family. At the time I had gotten out of being a mechanic and had gone to work at AutoZone in the corporate offices. When I applied for that job I put down my friend from Strike King as a reference. It was funny, because he laughed and said, “Sure, but if you go work there it’s not gonna be permanent because you’re going to end up working for me!” Shortly thereafter, a position as a customer service and sales & marketing assistant opened up and I went to work for Strike King. That job went from a sales & marketing assistant job to a marketing director’s position there. They are a great company and it really helped to not only start but grow my career.

MF: What is your favorite part of the fishing industry and angling culture?

CB: The People! The people are phenomenal. As my very good friend Don Barone would say it’s “The Family OF Us.” When you’re out here on the road whether it’s a week or 3 weeks, the people are the ones that make the sport. Good, bad, or indifferent they’re the ones that really make this sport what it is; it’s pretty incredible!

MF: I hear you are not only an angler but an overall outdoor enthusiast. What other outdoor pursuits are you passionate about?

CB: I’m a big photographer. I love to photograph landscapes and anything really that involves the outdoors. I love duck hunting. I don’t do it near as much but I love it. My oldest child plays basketball… So when I’m home I really enjoy watching him play. Anything my kids do; my kids are my world. 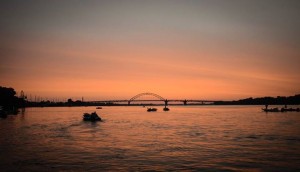 Sunrise over the Delaware River – photo by Chris Brown

MF: The fishing and marine division has become a staple of the Rigid line-up. When did that begin and what led to it?

CB: It’s started a little more than three years ago… It grew from a relationship between Dave Davis our VP of Sales and Brandon Palaniuk. They got to be good friends and it basically grew from there. We started to adapt some of our lights to the marine industry and it just kind of exploded from there. We are growing significantly in the marine side these days and that’s thanks to Brandon and many others.

MF: What other industries will you commonly find Rigid lighting in?

CB: We’re very big in Automotive, Off-Road, ATV/UTV, — Powersports products mainly. We also do a lot in Agriculture, Mining, Fire & Rescue or government services, Train & Rail. We also do a little bit in the Aeronautic market… But our bread & butter is the Powersports & Marine markets.

MF: Rigid has a strong group of professional athletes and tradespeople it has partnered with called the “Torture Team.” What do you think separates your pro-team from others in the industry? 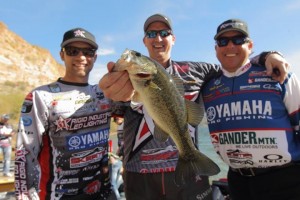 CB: Our guys are some of the best in the business. Aside from that, we’ve got guys that are into the functional bling to guys who just need it for its function. Every guy has a unique way of utilizing the product both on and off the water. And it really helps them all the time. Like it says in the name, they really torture the product and use it to its fullest capacity. Our guys were hand-picked and we are lucky to have some of the absolute best in the business working with us.

MF: There have been so many advancements, and the market has progressed so fast in a rather short time. You guys are clearly the industry leader, what else can we expect from Rigid in the near future?

We were also acquired back in February by a company called Truck-Lite out of N.Y., who does a lot of OEM heavy duty truck lighting for commercial vehicles. So that opens a lot of doors for us in the Marine division to do a lot of great things with them involving trailers and really a whole bunch of awesome opportunities to advance the current product line. 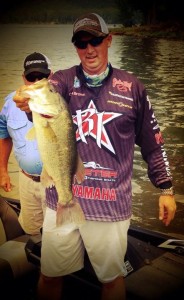 A Big One on Tournament Day

MF: When you’re out in the boat on your own and you’re not filming with your bass anglers or taking out a business associate, what do you like to fish for?

CB: I live on Lake Guntersville so when I am home and get the time I really love to go out and catch some giant bass.

MF: What was the first lure you ever purchased?

MF: Where do you think your strengths and weaknesses lie when it comes to fishing techniques?

CB: I’m not good at ALOT of stuff, I can promise you that! Strengths – in the past five or 10 years I’ve become more of a deep water guy. I really enjoy throwing a big crankbait, Carolina rigging, or throwing a big football head jig. Weaknesses are probably some of the more finesse stuff. The dropshot, stuff like that. Whenever I’m out West with some of my pro anglers I make sure to get them to show me a few tips and things with that stuff. I’m pretty jazzed right now because the water is getting pretty warm at home and the fish are moving deep and I’m really looking forward to that deep water bite!

MF: While at the Elite Series events we may find you on the water but can almost always find you in the Rigid booth at the expo and either backstage or in the crowd. Has anything stuck out from event to event? Is there one thing you seem to see or experience often? 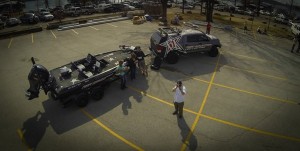 Trading Shots with Don Barone from the Drone

CB: One thing that sticks out to me is Friday afternoon come weigh-in. You got some guys who pretty much know for sure they either are or aren’t going to fish the weekend, you see those changing attitudes, the demeanors in the guys. But then you got other guys who are on the bubble. I’ve got a lot of great friends out here, and while I can’t have favorites; in my heart I do. But, you got a lot of great people out here; to see them on that bubble, you know they lose $10,000 by an ounce and it’s hard to watch that. I don’t know how to console them because I know as long as I do my job every two weeks I’m going to get paid, instead of being mere ounces from ten grand. So, it’s the up and down range of emotions you witness in the anglers, the roller coaster of emotions. You witness it, you see it; it’s pretty wild.

One of the most memorable recent moments was last weekend seeing my close friend Justin Lucas on Sunday at weigh-in, not knowing what Aaron Martens had, knowing that it’s so close. Just seeing the range of emotions in him, while he’s going for his first Elite Series win; that was pretty cool. As a photographer I’m looking for that story within a story or that picture that’s gonna tell 1000 words. That was definitely one of them. That range of emotion that you see; day in and day out from the guys. Good, bad, or ugly; it’s pretty wild. 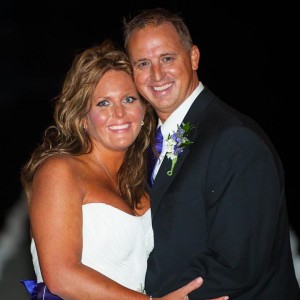 Chris Brown and his wife Laura

MF: If you had to choose ONLY ONE technique or lure to use for eternity, what would it be?

CB: A Texas Rig; you can do A LOT of stuff with that!

MF: If you were going to be stranded on an island with one other angler who would you want it to be?

CB: My favorite fishing partner is my wife. 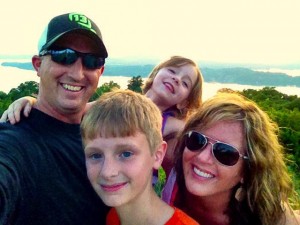 MF: That’s the end of the questions. Is there anyone you would like to thank or mention?

CB: I’d like to thank my wife Laura. She’s my best friend, my biggest fan and supporter. But she’s also the biggest supporter of my athletes and friends in the fishing industry. It’s not uncommon for one of my guys to get a text from her before an event wishing them luck. She’s just always been there; she is my rock, my anchor, and I thank her for everything. I’d also like to thank Rigid for bringing me back into the fishing and marine industry and allowing me to do what I do. It’s a great gig and I really love my job. I also can’t go without thanking the folks at Strike King for getting me started in this industry in the first place. Lastly I want to thank all of my friends and family in the fishing industry – The Family of US! Thank You All!

But my wife, first and foremost… She’s the deal.