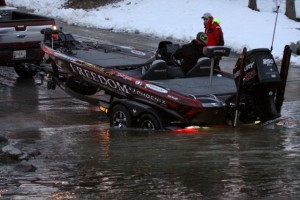 If I’ve learned anything since our family moved to Alabama, it’s that cold is much different here.

Being from California, I had a way of dealing with the cold that worked for me. I had a mid-weight base layer set that I often mentally juggled when to wear the stuff. If I was going out to the lake in the morning, and the early morning air temperatures were going to be cool enough, but quickly rose, I would judge whether or not to add the base layers by how long I would have before I had to strip them off.

When I got my first real chance to spend any time in “real” wintery conditions in the South, I was shocked at how different it was from my experience in the Western cold.

I was at a media event with T-H Marine and their pro staff at Pickwick Lake in November. The first day was a chilly 25 degrees, but I decided that my sweatpants and hoodie under my raingear was going to be sufficient – I got cold sitting in the boat taking pictures and shooting videos. 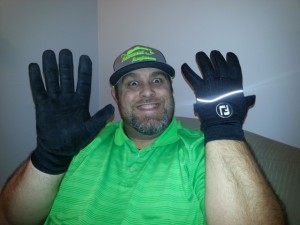 The next day, when I got in my truck to go to the lake, the temperature gauge in my truck read 11 degrees. Remembering the experience from the day before, I ran upstairs, put on my base layer, then sweatpants a hoodie, wool socks, Gore Tex socks, my raingear and a beanie cap – I still froze.

It prompted me to make the addition of heavyweight base layers, and it made me start paying attention to things other anglers did to stay warm. The recent Bassmaster Classic was a great study in learning how other anglers stay warm, and I saw something the following week at the Alabama Bass Trail Northern Division opener that I thought I should share.

Gloves
While fishing in gloves is a bothersome task, there are times that there is nothing an angler can do but wear them. “I’ve been with Kevin VanDam on Table Rock Lake in the cold, and he wears glove liners made by Under Armour to help shield him from the cold. They actually work well, with the exception of the fact that they are not water resistant by any means.

I saw something from Matt Herren at the Bassmaster Classic – the coldest on record. He shot a video with Chad Morgenthaler and was trying to keep Morgenthaler from stealing his gloves. Herren went to Academy Sports and bought several pair of Waterproof / Windproof Winter golf gloves. They are lined with Thinsulate, have waterproof material on the back of the hand, and are made so that you can feel the clubs while playing golf in colder conditions.

I bought two pair when I returned from the Classic 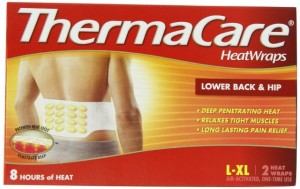 Adhesive Heat Patches
In extreme conditions, like experienced during the 2015 Bassmaster Classic at Lake Hartwell, I heard some anglers discussing the use of heat patches like those made by ThermaCare. These are the adhesive heat patches used to soothe muscles under strain, and I heard of some anglers wearing them on their lower back and even across their shoulders and neck to help warm them up under their layered clothing.

Take caution with this application as the label says to pay attention for skin rashes, presumably from the adhesive and the heat being that close to your body.

Hot Hands and Toastie Toes and Heated Insoles
We’ve all heard of the use of Hand Warmer packets in our pockets and such during cold weather fishing. Once activated, these little packets can be placed in a pocket and one can alternate holding the rod and keeping the opposite hand in pockets for warmth. You can place them beneath layers under wristbands to help warm the blood going to the fingers to help as well.

I saw an angler get off the water at the Alabama Bass Trail and begin taking his shoes off, then a sock. It revealed a pair of “Toastie Toes” adhesive patches placed on top and on the bottom of the toe areas of his liner socks. By putting the adhesive patches on the liner sock, and layering another thin sock over them, he kept them from balling up under his shoes, and they kept his toes warm throughout the day.

Media colleague Pete Robbins purchased a pair of battery operated thermal insoles to wear in his shoes on the water. The pair he chose were rechargeable and operated by a remote control. At around $100, this is a more pricy option, but he seemed to think it was a very wise purchase. 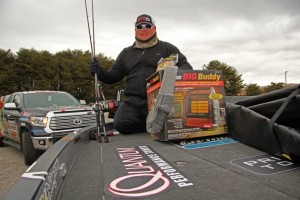 Jacob Powroznik with his Buddy Heater – photo by Alan McGuckin

Propane Heaters
Some anglers have begun carrying propane fueled Buddy Heaters on their boats in extreme cold. They are easy to turn on and off, so you can store it in a compartment of under the console when running, then return them to the deck for use when fishing.

Jacob Powroznik talked about actually kneeling on the deck to fish next to a buddy heater during practice. He said by doing this, the warmed air around his rod and reel kept the water from freezing on his guides.

Effective Layering
Justin Lucas talked about all of the different layers he was able to order from Under Armour that helped him stay warmer than he would without. The most important areas were his head and extremities that release so much heat from them because of the distance from the torso.

Lucas said that he wore his Under Armour Cold Gear 3.0 base layer for overall body warmth, then added Cold Gear Infared socks, and Gore Tex Tactical GTX boots to keep his feet warm and dry. He wore a Cold Gear Infared Tactical balaclava and Infared Beanie over the top for layering his head. “I was a lot warmer than I ever thought I could be in those conditions,” he said. “My Under Armour Cold Gear really helped me focus on fishing rather than the conditions.” 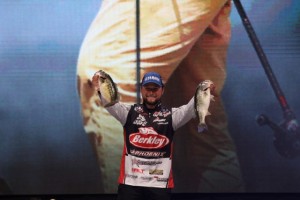 Stay Home?
The other option for anglers is to stay at home and skip a tournament.

But, who wants to do that?