Make the Most Out of Fall with Brent Ehrler 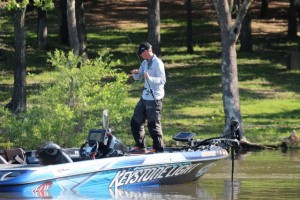 Brent Ehrler is a master at finesse fishing.  His ability with a dropshot rig and reading his Humminbird Fishing Systems make him deadly in deep water.  He has won tournaments in water deeper than 35 feet all over the country.

That is not how the Redlands, Calif. pro fishes in the fall.  When the fall of the year arrives, Ehrler prefers to turn on the turbo and cover as much water as he can.

“In the summer, bass are going to school up and you can sit there and make the same cast and catch bass,” he said.  “That’s not the same in fall, the bass will gather in wolf packs and roam the shallows chasing migrating shad waiting for them their chance to gorge on them.”

He operates the same way, and his approach is to find those wolfpacks, and do so by using aggressive tactics.  His approach is built around having three baits at the ready; a topwater bait, a jerkbait and a lipless crankbait.  He uses them all in specific instances.

We stated that Ehrler has three favorite weapons for his turbo charged approach to fall fishing.  His first choice is a Lucky Craft Gunfish 115 topwater bait.  he said that it the best all around topwater bait in his arsenal because it gives him a wide variety of uses.  “The Gunfish 115 allows me to make really long casts, it has a chugging mouth and it walks really well,” he said.  “It also leaves a bubble trail that is similar to a buzzbait that really helps to call fish to the lure; which is a big help when fish are roaming so much.” 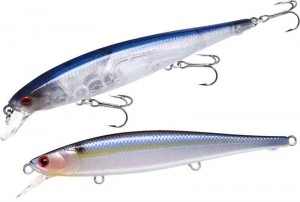 He likes the Gunfish in the early fall when the water temperatures are still somewhat moderate, and he can see baitfish activity on the surface.  “It’s the kind of lure that I can go from empty livewells to full in a matter of a few casts,” he said.  “All I have to do is keep moving and I will eventually come into contact with one of those wolfpacks.”

When the water begins to cool off as the season gets deeper into the fall, Ehrler turns to a bait that has similar action to the Gunfish, but is more effective when the bass won’t commit to the surface to strike.  That lure is the Flash Pointer 100 jerkbait.  “I used to use a Slender Pointer, but this bait has almost completely won me over,” he said.  “It has a great side to side slashing action that also calls fish to it; but, just under the surface.”

His third and final choice is used specifically around the last remaining grassbeds in bays after the summertime grass begins to die off.  That lure is an LV500 lipless crankbait.  “I use the LV500 to fish the last of the remaining grass in large areas that held grass throughout the summer,” he said.  “I can make long casts with it and use it to rip through the grass and draw reaction strikes from 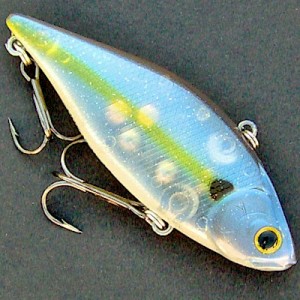 fish trying to hold in the grass.”

His color selection is always shad patterns.  He prefers ghost type colors for the topwater unless there is a heavy stain, then he turns to bone.  He prefers Stripe Shad in the Flash Pointer and Aurora Black, Ghost Minnow and Chartreuse Shad in the LV500.

For the jerkbait, he uses the same reel, but chooses a 7′ medium-light Lucky Craft LVR rod for the quick tip to snap the jerkbait sharply.  He opts for 10-pound-test Sunline FC Sniper in water with little cover, but will upsize to 12-pound-test when fishing around timber, or for larger than average sized fish.

Areas and Approach
Ehrler said that he likes to begin his search in the fall on flats and the flat side of creeks in the fall.  “I think that bass tend to move more horizontally this time of the year because I catch more of them on flat areas than I do on steeper structure,” he said.  “The flats on the main lake, or the flat sloping side of creeks are my favorite, as long as I can see some baitfish activity in the area.” 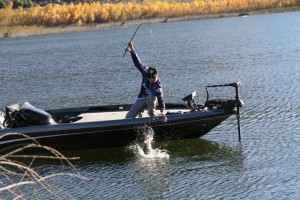 His one exception is to look in bays that had held expanses of grass throughout the summer.  “As aquatic vegetation dies, the wind and wave will rip it up and move it around,” he said.  “The first to have this happen is usually the shallower water grass.  I look for clumps of grass that can be about the size of my boat.  If I can find a few of those, then those bass that once lived in 10 acres of grass in summer will all be those remaining deeper clumps; that is when I throw the LV500.  I reel it up to the clumps, let it bog down and rip it free; I’ve had some great days in fall using that technique.”

He said that he starts his search on main lake areas, but moves quickly to the backs of pockets if he doesn’t get any feedback.  “The funny thing about this time of the year is that it’s really rare to find fish on the same spot from day to day,” he said.  “Their movements are dictated by the movements of the shad, and if we as anglers don’t adopt a similar approach we can miss more opportunities that we will capitalize on.”

He said this is the time of the year to keep the trolling motor cranked up, and to cover water quickly.  “New water is king this time of the year,” he said.  “Find the type of stuff they are on and quickly run as much of that as you can, and I’m sure you will catch more fish in the fall than you ever had before.”