Editor’s Note – There are many fans who wonder what it would be like to compete in any sports’ championship game.  Bass fishing is no different, and while we can imagine what it feels like, we cannot truly know until we experience the moment for ourselves.  Only a Bassmaster Classic competitor can explain it in detail.

Now, thanks to friend a frequent contributor to Advanced Angler, Mark Menendez; a five-time Bassmaster Classic qualifier, we can picture being at our first Bassmaster Classic through his eyes and memory of his first event in 1997.

Ride along as Menendez paints us a picture of those moments. 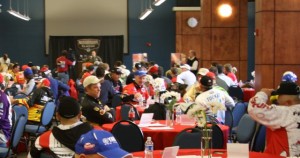 The first Bassmaster Classic that I remember watching on television was Bo Dowden’s victory in 1980 on the St. Lawrence River.  It was covered by ABC on a primetime documentary show and it left me wanting more.

As I press the fast forward button, my heart rate increases as I reminisce about the 1997 Bassmaster Top 150 on Neely Henry.   I was on the verge of qualifying for my first Bassmaster Classic, and I was in the first flight on the final day.  This was the final event of the season, and after competition for the day was over, I had small limit.  It left me on the river side waiting two hours to see if I had punched my ticket to the Classic.  After everyone had weighed-in,  I was the last man in the Classic field!  I can still vividly remember the elation and relief of making my ultimate goal.

The Bassmaster Classic is the pinnacle of competitive bass fishing, winning this championship makes history.  The winning angler doesn’t really ever have to catch winning sacks of fish again as the bass fishing loyalists remember each angler that compiles the winning Classic bag forever!

There are many of us that have been “King for a Day,” and led the biggest event in fishing.  Leading the Bassmaster Classic is a surreal feeling,  I did after day one of the 2003 Classic, and knowing the feeling, that is a moment that continues to motivate me on long difficult days on the water. 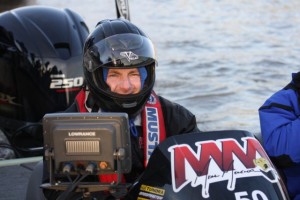 Preparation for the Classic begins long before arriving to the body of water.  In my earliest Classics there were strict limits on how much tackle we could bring;  Seven rods and one giant tacklebox was the limit on the 1997 Bassmaster Classic.   I spent countless hours organizing and culling tackle. I would place a specific bait in the box knowing that it might be culled, or it might be in the box at day’s end.  The alarm clock would go off the next morning to find me back in the tackle selection working with the same bait!

Now, all of my Strike King Lures and Lew’s rods and reels can ride along.  I can even carry spools of Seaguar line without problem, we could only carry what fit in that tacklebox in those days.

The opening morning of the event, I fired my outboard and ran to a rocky bank being pounded by the wind, and caught a keeper spotted bass within my first 10 casts on a white spinnerbait!  First mission accomplished!  That little 13 inch bass settled my nerves and I went on to fill a nice limit that day.

Scouting the Classic locations is something that I have done at every Classic invitation.  It gives me a great geography lesson of the area, and I feel much more comfortable having been to the location before the event’s official practice period begins.  Because of the pre-practice, I still have to be careful about not entering the event with a preconceived notion of where I am going to fish.

As of a few years ago, the anglers can fish in their personal boats, and this change makes us all feel better.  But, if there is any malfunction,  then it rests completely with the angler to get it repaired, fortunately the boat and motor companies have service crews there to help us.  It’s nice to have the Skeeter and Yamaha teams there if something goes wrong; especially at the Classic.  I also feel better with the type trolling motor and depth finders that I trust every day.  Not only that, I’m the one who places the charger on my batteries; I see that it is filled with gas and I check the prop.  The end result is that I get a good night’s sleep knowing that my rig is tournament ready.  This is a daily ritual at every event, and it’s nice to have it at the Classic now too. 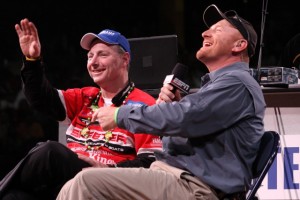 My fondest memory of the Bass Master Classic was my first day of competition in 1997.  It was a whirlwind on Lake Logan Martin in Alabama.   We were up at 3:30AM heading to the boat yard because  it was hour convoy to the ramp, with full police escort.

The eight hours on the water evaporated like it was only 15 minutes.  We had drivers, so, I took an hour nap on the way back to the arena.  Once we arrived at the arena, our boats and trucks were all washed and the media was in the boat yard getting early interviews.

It seemed like it took forever to get inside to take the ceremonial boat ride around the floor.  As the anglers were all led to the weigh in stage, the line of boats and trucks was getting shorter.  I began to realize that my moment was on its way.

My vehicle and Classic boat finally were staged just outside the arena, and I could start to feel the air conditioning as it teased me coming from the tunnel on the 95 degree August day.  The rig lurched forward, and I had made inside the building.

From inside over the sound system, I could hear Ray Scott pumping up the fans with his famous encouragement to the crowd; “Let’s hear it A-Team. Give it to me B-Team,” he commanded from the stage.

The angler in front of me was called to the stage, and my rig eased up to the edge of the arena floor and stopped to wait for the preceding fisherman.  The crowd had a heartbeat of its own, and I could kind of get a sense of what was going on because I could see the Megatron screen through opening.  The crowd cheered and clapped as the angler before me exited the stage.

Suddenly, my picture appeared on the screen, and it was at that moment, the sounds from the arena went silent to me for a second.   The truck moved and the boat followed as Scott 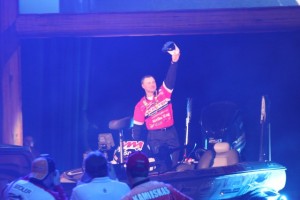 announced from the stage; “Next, from the great state of Kentucky!”

My Adam’s apple contracted in my throat and my eye’s watered.  It was here!  The moment I had dreamed about for years was coming to life! I truly was a Bassmaster Classic competitor.

This Bassmaster Classic will have additional rookies in the field this year, and each will take a similar memory from their first event as I did long years ago.  From these Bassmaster Classic Qualifiers there will be Classic one timers, daily leaders, and eventually, fame for a single angler.

One thing is for sure, the Bassmaster Classic is the show of all shows in our sport.  It is my hope that this Classic gives all the qualifiers the same sense of pride and accomplishment that it has given me.  As with all of the past Bassmaster Classics, this group of anglers is part of the “society” that loves bass fishing.