The Importance of Cranking 21 Inches per Turn with David Fritts

by Ken Duke – special to AdvancedAngler.com 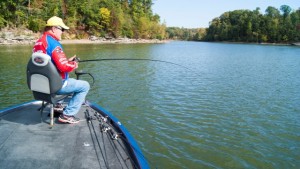 In the history of competitive bass fishing, there have been some great crankbait anglers. Rick Clunn and Kevin VanDam come to mind immediately. But few fishermen are more closely associated with deep diving baits than North Carolina’s David Fritts, and he has a Bassmaster Classic championship (1993), Bassmaster Angler of the Year crown (1994) and Forrest Wood Cup title (1997) to show for his cranking efforts.

Fritts takes a practical, but sophisticated approach to his cranking. He realizes that gear ratios grab the attention of engineers and marketers, but that when evaluating a fishing reel, what’s far more important is the amount of line it takes in for every turn of the handle. Among anglers in the know, it’s referred to as “inches per turn” or IPT, and Fritts has some very specific ideas and opinions about IPT when it comes to diving baits.

“Everyone has a cranking speed that feels comfortable when they’re fishing a lipped crankbait,” Fritts says, “and there’s a certain speed that will cause a lure to dive to its maximum depth and have the greatest action. The key is to get those two things to work in combination. For me, it requires a reel that takes in 21 inches per turn of the handle.”

For Fritts, it’s a mantra … and the most important number in his bass-catching formula. It also identifies his favorite reel for fishing diving crankbaits as the Lew’s BB1 Pro Series Speed Spool Casting Reel with a 5.1:1 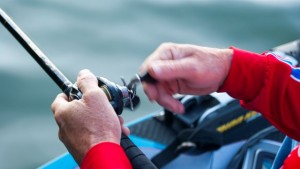 gear ratio. That might seem slow in this era of baitcasters with gear ratios like 8.5:1, 9:1 or even higher, but the BB1 is smooth and long-casting because of its Multi-Stop anti reverse system, and the combination of gear ratio, geometry and spool size means that it brings in 21 inches of 10-pound-test line for every crank of the handle. That’s exactly what Fritts wants and needs for most of his cranking.

He’s not talking about lipless crankbaits here. For those lures, he wants more IPT and a higher gear ratio, preferring something around 6.4:1. He needs the extra speed and pick-up to take in slack when he wants to yo-yo the bait and stay in contact with it even as it falls. Twenty-one IPT is strictly for his diving baits and especially for the deep-diving lures he uses to reach the bottom in 10 or more feet of water.

“The two big mistakes that anglers make when they’re fishing a crankbait is that they under-wind or over-wind … and most of them over-wind,” he says. “Either way, you’re not getting the crankbait to its maximum depth and you’re not catching as many bass as you should be catching.”

Under-winding (retrieving the bait too slowly) can give fish too good a look at the bait and prevent it from ricocheting off cover in an erratic manner that draws reaction strikes. And if you’re not getting reaction bites from your crankbait, you’re losing out on their primary appeal.

Over-winding (retrieving the bait too rapidly) will trigger some reaction strikes, but the bass will be forced to strike wildly at the lure, often missing it completely or getting hooked poorly. It’s hard to eat what you can’t see very well, even when you have a cavernous mouth like a bass. 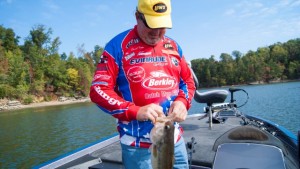 The retrieve Fritts gets with a reel that takes up 21 inches per handle revolution keeps his diving baits “lively” without overdoing it. It also fits his angling style and his natural rhythm when fishing. It will probably work for your cranking, too.

Remember, in deep cranking, it’s all about IPT.