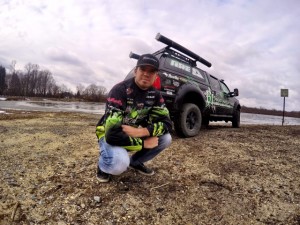 “I’m excited to be a part of the A.R.E. Fishing Team and look forward to showcasing the high quality, functional, and eye appealing products that A.R.E. has built their professional reputation on,” said Avena.

“There is nothing more important to anglers while on the road than the organization and safety of our gear,” Avena continued. “A.R.E.’s Z Series Cap not only gives me more dry storage, but they also include the added safety feature of the Remote Keyless Entry. Although A.R.E. is known for their fiberglass truck caps and tonneau covers, another product that I really believe in are their well-designed Rod Pods. These pods are 8-feet long and 6-inches in diameter and equipped with a spring-loaded end cap that can accept a pad lock for extra security. I can haul my rods and gear around the country efficiently and safely.”

A.R.E. Marketing Manager Andy Clutter stated, “We couldn’t be happier to partner with an angler like Adrian Avena. He has all the qualities we look for when identifying potential members of the A.R.E. Fishing Team – a strong and growing resume, incredible talent, and an eye-catching pickup truck. We look forward to working with him throughout the 2015 season to help tell the story of our fiberglass truck caps and tonneau covers.”

A.R.E. was founded in 1969. The company’s name is comes from the first initial of his three oldest children: Anne Marie, Ralph, and Elizabeth. A.R.E. originally produced aluminum recreational truck caps. In 1979 they began production Deluxe Commercial Units (aluminum truck caps for commercial use). In 1982 A.R.E. worked with a sister company to begin manufacturing fiberglass truck caps. In the late 1980s they began the process of painting caps using an automotive base coat / clear coat system. In 1995, A.R.E. opened their state of the art 256,000 square feet in Massillon, Ohio. The plant produces more truck caps and covers than any other, and is the most environmentally conscious facility in the industry.