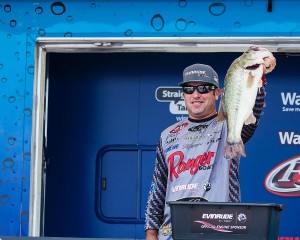 PARIS, Tenn. (June 26, 2014) – Pro angler Brett Hite of Phoenix, Ariz., brought a five-bass limit to the scale Thursday weighing 24 pounds, 14 ounces to grab the lead after day one of the Walmart FLW Tour at Kentucky Lake presented by Evinrude. Hite now holds a 2-pound, 3-ounce lead heading into day two of the four-day event, hosted by the Henry County Alliance, that features 162 of the best bass-fishing anglers in the world competing for a top cash award of up to $125,000.

Right behind Hite in second-place is pro Randy Haynes of Counce, Tenn., who weighed in five bass for 22 pounds, 11 ounces. Haynes was the winner of the Rayovac FLW Series tournament held on Kentucky Lake just one month ago.

“I had an early boat draw, and I ran to a spot that I had found real late in the last day of our practice period,” said Hite, who won the first FLW Tour event of the season at Lake Okeechobee in February. “I got my boat in just the right position and I was catching them literally cast after cast after cast.”

Hite estimated that he caught around 20 keepers, but stopped fishing at noon to conserve his fish.

“You start throwing back 3½ -pounders and you know that those are going to be crucial fish later in the tournament,” Hite said. “I fished there until about noon, then got off in the flats and put my Minn Kota Talons down and just kind of protected that spot. I probably could have stayed on it and maybe caught another big one, but that’s always a tough decision. I figured that I wanted to catch around 25 pounds. You can’t win the tournament the first day, but you can lose it.”

Hite said that he used a variety of different baits to get his school of bass biting.

“I’ve got a whole deck full of rods. You catch one on a certain bait and then you have to go back and kind of trick them to bite on something else. I’m just rolling through a bunch of different baits trying to get that school fired up.

“I’ve got a couple of other really good ledges that I didn’t even go to today,” Hite went on to say. “I had a lot of spectators watching me, but they were all really considerate. They gave me plenty of space to work.”

The top 10 pros after day one on Kentucky Lake are:

Hite also won the Bridgford Big Bass Award on the pro side Thursday with a bass weighing 7 pounds, 5 ounces to win the $500 prize.

Anglers will take off from Paris Landing State Park located at 16055 Highway 79 N. in Buchanan at 6:30 a.m. each day of competition. Friday’s weigh-ins will be held at Paris Landing beginning at 2:30 p.m. Saturday and Sunday’s final weigh-ins will be held at Walmart located at 1210 Mineral Wells Ave. in Paris beginning at 4 p.m.

Fans will also be treated to the FLW Expo at Walmart on Saturday and Sunday from noon to 4 p.m. prior to the final weigh-ins. The Expo includes Ranger boat simulators, a Chevy Truck Tour, the opportunity to interact with professional anglers, enjoy interactive games, activities and giveaways provided by sponsors, and fans can learn more about the sport of fishing and other outdoor activities. All activities are free and open to the public. Also on Sunday, country music star Michael Ray will perform a free live concert on the Walmart weigh-in stage at 3 p.m.

FLW is the industry’s premier tournament-fishing organization, providing anglers of all skill levels the opportunity to compete for millions in prize money nationwide in 2014 over the course of 229 tournaments across five tournament circuits, four of which provide an avenue to the sport’s richest payday and most coveted championship trophy – the Forrest Wood Cup. FLW tournament fishing can be seen on the Emmy-nominated “FLW” television show and is broadcast to more than 564 million households worldwide, making it the most widely distributed weekly outdoors-sports television show in the world. For more information about FLW visit FLWOutdoors.com and look for FLW on Twitter, Facebook, Instagram and YouTube.