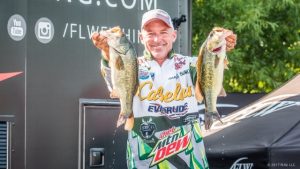 MARBURY, Md. (June 15, 2017) – Pro Clark Wendlandt of Leander, Texas, grabbed the early lead Thursday after Day One of the FLW Tour on the Potomac River presented by Costa Sunglasses with five bass weighing 19 pounds, 11 ounces. Wendlandt will begin Day Two with a 5-ounce advantage over second place angler Yamamoto Baits pro Tom Monsoor of La Crosse, Wisconsin, in the four-day event that features the world’s best bass anglers competing for a top award of up to $125,000.

“To be honest, I didn’t really think I’d catch them like that today,” said Wendlandt, who won on the Potomac River when the FLW Tour last visited in 2015. “I really struggled early on. I only had three fish in the boat at noon. I thought I would do better later on in the day, but couldn’t get anything going then either. The middle of the day was really the only time I did well.”

Wendlandt said he caught around 18 keepers throughout the day, and that the bulk of his weight came from one area.

“I practiced from Washington D.C. all the way down to just about as far as you can go on the river, and it was the best place that I found,” said Wendlandt. “There were a lot of boats in there today, so I think tomorrow could be a lot harder. At some point I may just have to bail and go do something else.”

Wendlandt said that there are still plenty of options for him to catch a decent limit, even if his primary area is overcrowded.

“The Potomac River is a unique fishery because you can catch them from grass one day and out of wood and rocks the next,” said Wendlandt. “Everything can be good, it just depends on the tide. I guess I’ve been good at knowing the right places to fish at the right time.”

The top 10 pros after Day One on the Potomac River are:

Dove caught a bass weighing 5 pounds, 15 ounces – the largest in the Pro Division – which earned him the day’s $500 Big Bass award.

The top 10 co-anglers after Day One on the Potomac River are:

Eaves earned $250 for the Big Bass award in the Co-angler Division with a 4-pound, 14-ounce largemouth.

The total purse for the FLW Tour at the Potomac River presented by Costa Sunglasses is more than $800,000, including $10,000 through 50th place in the Pro Division.

Prior to the weigh-ins Saturday and Sunday, fans are invited to come out and experience the free FLW Expo at Smallwood State Park from noon to 4 p.m. The FLW Expo is a great opportunity for fishing fans of all ages to meet-and-greet with top FLW Tour anglers, enjoy games, activities and giveaways provided by FLW sponsors, and learn more about the sport of fishing and other outdoor activities.

Youth are also invited to participate in the free FLW Foundation Unified Fishing Derby at Smallwood State Park on Saturday, June 17, from 9-11 a.m. The event, hosted by FLW Foundation pro Cody Kelley along with other FLW Tour anglers, is free and open to area youth (18 years of age and younger) and Special Olympics athletes (all ages). Rods and reels are available for the first 50 participants to use, but youth are encouraged to bring their own if they own one.