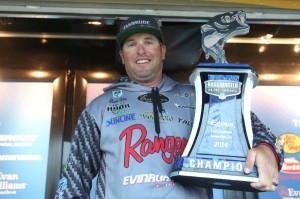 FLIPPIN, Ark. (March 18, 2014) – Ranger Pro Brett Hite is off to the hottest start in professional bass fishing with a pair of tour-level wins and another top-10 finish to his credit in the still young 2014 season.

The 35-year-old Arizona pro has eight years of FLW Tour experience but is considered a rookie on the Bassmaster Elite Series. His 13-pound victory on Sunday at Lake Seminole marked the second time in B.A.S.S. history that a rookie won his first Elite Series tournament. The win earned Hite $101,500 in prize money, plus an additional $5,000 Ranger Cup bonus, and secured his spot in next year’s Bassmaster Classic. The victory also gave the “rookie” an early lead in the B.A.S.S. Elite Series Angler of the Year standings while sending his combined career earnings over the $1 million mark.

Hite’s start to the 2014 season is made doubly impressive as he achieves similar on-the-water success on two professional tours.

Hite won his fourth career FLW Tour event in February on Lake Okeechobee and followed that up with a sixth-place finish on Lake Hartwell two weeks ago. With a third of the 2014 FLW Tour season already in the books, Hite sits atop the FLW Tour’s Angler of the Year Standings to go along with $249,500 in total winnings so far this year.

“What Brett’s already accomplished this year is incredible, and the 2014 seasons are really just getting started,” said Ranger Boats Vice President of Marketing Bart Schad. “He’s fishing both major tours against the best competition in the world and his results have been lights-out. We’re proud he’s a part of the Ranger family and look forward to even more success in his future.”

Hite is a win away from matching the 2013 season of fellow Ranger Pro, Jason Christie, who won a pair of events on the FLW Tour to go along with a B.A.S.S. Elite Series victory. Hite will look to continue his torrid start to 2014 when the Elite Series stops on St. Johns River on March 20.

Headquartered in Flippin, Ark., Ranger Boats is the nation’s premier manufacturer of legendary fiberglass and aluminum fishing boats, which include series of bass, multi-species, fish ‘n play, waterfowl utility and saltwater boats. Founded in 1968 by Forrest L. Wood, Ranger Boats continues its commitment to building the highest-quality, strongest-performing boats on the water. For more information, go to RangerBoats.com.