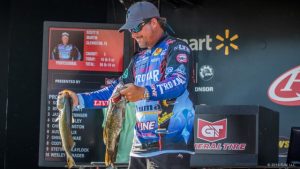 PLATTSBURGH, N.Y. (June 25, 2016) – Pro Scott Martin of Clewiston, Florida, weighed a five-bass limit totaling 16 pounds, 5 ounces Saturday to take a 2-pound, 3-ounce lead into the final day of the Walmart FLW Tour at Lake Champlain presented by General Tire. Martin’s three-day total of 58 pounds, 10 ounces make him the No. 1 seed on championship Sunday as the field is now cut to 10 in the four-day competition that features 160 of the world’s best anglers competing for a top cash award of up to $125,000.

Right behind Martin in second place is Bryan Schmitt of Deale, Maryland, who brought in a five-bass limit weighing 17-11 for a three-day total of 15 bass worth 56-7.

“I had some adversity to overcome out there today, so I feel very blessed to have caught what I did,” said Martin. “I experienced some mechanical issues this morning and had to return to the takeoff ramp. After I was cleared, I made some adjustments and caught some nice smallmouth.”

Martin said he caught three of his limit-fish from an area near Rouses Point, and two from a couple of honey holes. He said he used a creature bait, a tube and a topwater bait to piece together his limit.

“My original plan was to save those fish for tomorrow, but I ended up needing them today,” said Martin. “I’m glad I had them, but I’m going to have to go out there tomorrow and figure out something new.”

In addition to the smallmouth bite, Martin said he plans to focus on largemouths as well. He said he will have 15 rods on the back of his boat and is prepared to throw everything he has at them.

“At this lake, ounces are everything, and if you don’t catch a nice bag you’ll fall behind,” said Martin. “This tournament can’t be won with just smallmouth, so I need tomorrow to be an epic day. I’m fishing good. I’m fishing clean. I feel like I’ve made some really good decisions over the past few days, I just have to keep it rolling.”

The top 10 pros advancing to the final day of competition on Lake Champlain in are:

Overall there were 100 bass weighing 320 pounds, 7 ounces caught by 20 pros Saturday. All of the top-20 pros weighed in a five-bass limit.

Pro Chris Johnston of Peterborough, Ontario, Canada, clinched the 2016 Walmart FLW Tour Rookie of the Year award, which is awarded to the rookie pro angler who finishes the season with the highest point total.

Anglers will take off Sunday from the Plattsburgh City Marina located at 5 Dock St. in Plattsburgh at 6:30 a.m. EDT. Sunday’s final weigh-in will be held at the Crete Memorial Civic Center, located at 4 Beach Road beginning at 4 p.m.

Fans will also be treated to the FLW Expo Sunday from noon to 4 p.m. at the Civic Center before the final weigh-ins. The Expo includes a 100-yard Lew’s Casting Lane, the opportunity to interact with professional anglers, enjoy interactive games, activities and giveaways provided by FLW sponsors, and learn more about the sport of fishing and other outdoor activities. All activities are free and open to the public.

The Walmart FLW Tour at Lake Champlain presented by General Tire is hosted by the City of Plattsburgh and the Adirondack Coast Visitors Bureau.