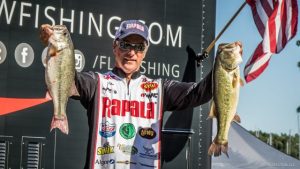 GILBERTSVILLE, Ky. (June 10, 2016) – Terry Bolton of Paducah, Kentucky, brought a five-bass limit weighing 22 pounds, 12 ounces to the scale Friday to take the lead after Day Two of the Walmart FLW Tour at Kentucky Lake presented by Mercury Marine. Bolton will bring a 2-pound advantage into day three of the four-day competition that features 162 of the top bass-fishing anglers in the world competing for a top cash award of up to $125,000.

In second place is Tennessee River-Ace Jason Lambert of Pickwick Dam, Tennessee, who weighed in a tournament-best five-bass limit totaling 24-4 Friday for a two-day cumulative total of 10 bass worth 42-13. The field is trimmed to the top 20 on Saturday, with only the top 10 anglers fishing on final day Sunday.

“I think I’ve finally gotten a little wiser than I used to be,” said Bolton, an 11-time Forrest Wood Cup qualifier who has 30 previous top-10 finishes in FLW competition on Kentucky Lake. “Two years ago when the Tour came here, I finished in 90th place – the worst finish that I have ever had in a June event. I’ve always prided myself on Kentucky Lake, and that one hurt my feelings. Last summer I spent a lot of time out here trying to rethink the way I do things. I’m getting older, and my old school methods were not working as well as they once did.

“I’m really proud of what I caught today, because I’d rather be off fishing some other way in a place all to myself,” Bolton continued. “You can’t be that way anymore, you have to fish behind people now. That’s why Randy (Haynes) and Mark (Rose) are so good – they’re accustomed to fishing around people. It took me several years, but I’m trying to get over it. I even invited Bryan Thrift in this week – I’m being a friendly guy.”

“I’m catching them in 20 to 27 feet of water,” he said. “I’m looking for little clusters of fish. The schools are broke up right now from the fishing pressure and the lack of current and they really moved around a lot today.

“I think I’ve got a little bit figured out, but the way fishing is right now you just don’t know what you’re going to catch,” Bolton went on to say. “I’ve just got to keep moving and find the fish and we’ll see what happens tomorrow.”

The top 20 pros that made the Buck Knives Cut and will fish Saturday on Kentucky Lake are:

Jones earned the Big Bass Award on the pro side Friday, weighing a 8-pound, 14-ounce largemouth to win the $500 prize.

Mark Horton of Nicholasville, Kentucky, won the co-angler division and $25,000 Friday with a two-day total of 10 bass weighing 33 pounds, 8 ounces, followed by Kevin King of Blountville, Tennessee, who finished in second place with 10 bass weighing 32 pounds, 6 ounces worth $7,500.

Anglers will take off from Kentucky Dam State Park located at 7792 U.S. Highway 641 N. in Gilbertsville at 6:30 a.m. CDT each day of competition. Saturday and Sunday’s final weigh-ins will also be held at the State Park, but will begin at 4 p.m.

Fans will be treated to the FLW Expo Saturday and Sunday from noon to 4 p.m. at Kentucky Dam State Park before the final weigh-ins. The Expo includes a 100-yard Lew’s Casting Lane, the opportunity to interact with professional anglers, enjoy interactive games, activities and giveaways provided by FLW sponsors, and learn more about the sport of fishing and other outdoor activities. All activities are free and open to the public.

Also for youth, the FLW Foundation’s Unified Fishing Derby will be held at Kentucky Dam State Park Saturday, June 11, from 9:30-11:30 a.m. The event is hosted by FLW Foundation pro Cody Kelley along with other FLW Tour anglers, and is free and open to area youth 18 years of age and younger and Special Olympics athletes. Event goodie bags will be awarded to the first 50 participants who sign up. Rods and reels are available for use, but youth are encouraged to bring their own if they own one. All bait is donated by the DMF Bait Company.

Coverage of the Kentucky Lake tournament will premiere in high-definition (HD) on NBC Sports Network (NBCSN) Sept. 28 from 1 p.m.-2 p.m. EST. The Emmy-nominated “FLW” television show airs on NBCSN, the Pursuit Channel and the World Fishing Network and is broadcast to more than 564 million households worldwide, making it the most widely distributed weekly outdoors-sports television show in the world.

The Walmart FLW Tour at Kentucky Lake presented by Mercury Marine is hosted by the Kentucky Lake Convention and Visitor’s Bureau.