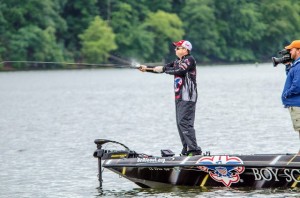 PARIS, Tenn. (June 28, 2014) – Boy Scouts of America pro Tom Redington of Royse City, Texas, brought a five-bass limit weighing 18 pounds, 13 ounces to retain his lead after day three of the Walmart FLW Tour at Kentucky Lake presented by Evinrude. Redington now enters the fourth and final day of competition as the No. 1 seed in the event featuring 162 of the best bass-fishing anglers in the world casting for the top cash award of up to $125,000.

Redington has brought a three-day total of 15 bass weighing 65 pounds, 12 ounces to the scale, which gives him a slim 1-pound, 2-ounce lead over second-place pro Skip Johnson of Goodells, Mich., who caught five bass today weighing 19 pounds, 12 ounces. Johnson has weighed in 15 bass totaling 64 pounds, 10 ounces in his three days of competition.

“It was way tougher today and my fish just weren’t there,” said Redington, who made his first top-10 cut of the season. “I didn’t get a limit until mid-morning. The schools that I had yesterday were kind of broken up and I was forced to scramble around and find some new fish today.

“The numbers of fish that I caught were about the same, but they were way smaller in size. And I didn’t see nearly as many fish there on my electronics. The weather was a little different today. We’d been getting storms in the afternoon, but today we had storms in the morning. I had to use finesse tactics today, like the first day. I tried throwing the big power baits, but I still only caught small fish.”

Redington said that he threw five different baits today, but only caught fish on three. He said that because the top-10 weights were so close he isn’t really feeling much pressure heading into the final day.

“Less than four pounds separates me from 10th place,” Redington said. “Whoever catches the biggest bag tomorrow will win. It’s basically a one-day tournament now, so there isn’t much pressure.

“The worst that I can do is 10th place, so I’m not going to try to put together a small limit to save my ego,” Redington went on to say. “I’m going to fish for the big ones and if I don’t get them, then so be it. I’m going for the win.”

The top 10 pros advancing to the final day of competition on Kentucky Lake are:

Anglers were also vying for the prestigious 2014 Walmart FLW Tour Angler of the Year presented by Kellogg’s title that is determined by the most points accumulated over the six Tour events in 2014.

For the second straight season, Livingston Lures pro Andy Morgan of Dayton, Tenn., wrapped up the Kellogg’s Angler of the Year title on Saturday. He narrowly edged out Repel pro Cody Meyer of Auburn, Calif., by just 9 points in a tightly contested race that thrilled fishing fans throughout the season. Morgan clinched the second Angler of the Year title of his career after finishing the tournament in 14th place. Morgan, who received $100,000 for the title, also will receive an automatic berth into the 2015 Forrest Wood Cup.

“These pros that we fish with are so good and they are so tough to fish behind,” said Kelley. “You have to find one little bait or one thing unique that you can do to catch a few. This week for me, it’s been a new bait from Crock-O-Gator bait company called a Swamp Bug Sr. I was able to get 8 or 9 keepers each day by slow rolling it and it was the key for me this week.”

Overall there were 84 bass weighing 247 pounds even caught by co-anglers Saturday. The catch included 12 five-bass limits.

Jason Johnson of Gainesville, Ga., clinched the Walmart FLW Tour Co-Angler of the Year presented by Kellogg’s title Saturday and won a new Ranger Z518C with a 200-horsepower Evinrude or Mercury outboard plus an automatic berth into the 2015 Forrest Wood Cup.

“I’ve been fishing as a co-angler for three years,” said Johnson. “My first year on Tour I practiced with Brett Hite. Last year I practiced with Cody Meyer. This year, I’ve been practicing with Brent Ehrler. Those guys are the best in the world and when you practice and fish with them, these kinds of things tend to happen.”

The final 10 pros will take off from Paris Landing State Park located at 16055 Highway 79 N. in Buchanan at 6:30 a.m. on Sunday. Sunday’s final weigh-in will be held at Walmart located at 1210 Mineral Wells Ave. in Paris beginning at 4 p.m. The event is being hosted by the Henry County Alliance.

Fans will also be treated to the FLW Expo at Walmart on Sunday from noon to 4 p.m. prior to the final weigh-in. The Expo includes Ranger boat simulators, a Chevy Truck Tour, the opportunity to interact with professional anglers, enjoy interactive games, activities and giveaways provided by sponsors, and fans can learn more about the sport of fishing and other outdoor activities. All activities are free and open to the public. Country music star Michael Ray will perform a free live concert on the Walmart weigh-in stage at 3 p.m.