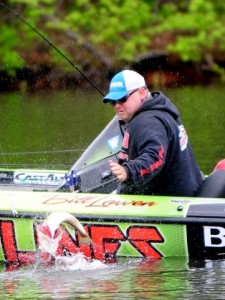 Forsyth, MO – Vicious Vision Premium Polarized Sunglasses and B.A.S.S. Elite Series Pro, Bill Lowen, have agreed to a contract extension that makes Lowen a member of the team through the end of 2014.  Bill joined Vicious Vision right before the Bassmaster Classic in February and has been fishing the Pro Series beta lens since that time.

Known on tour as “Mr. Consistent”, Bill has finished in the money in nearly 70% of his B.A.S.S. tournaments.  So far in 2013, he has received a check in three tournaments including a stellar Top Five finish early in the year.  He also fished his fifth Bassmaster Classic in Tulsa this past spring where he came in 18th place.

“I spend a tremendous amount of time in the outdoors — whether it’s fishing, hunting, or driving down the highway.  To me, it’s a big plus to have the best pair of eyewear that one can get and with Vicious Vision Pro Series Sunglasses, that’s exactly what you get,” boasted Lowen.  “If you put on a pair of Vicious Vision polarized sunglasses, you’re not going to be disappointed.”

“When I finally had the opportunity to sit down with Bill, I learned very quickly that he was the type of guy I wanted wearing my sunglasses,” added Vicious Vision Owner, Dr. Doug Jordan.  “His attention to detail, family-first attitude and commitment to only fish with products he could count on went a long way in securing this contract extension with us.  We want a team of guys that believe in our glasses and know they can’t get a better product no matter where they look.”

Offering a full line of performance eyewear under the trademark of Vicious Vision, the company is owned and operated by Doug Jordan.  Jordan is a 20+ year veteran of the eyecare and optical field.  He co-owns a large optometric practice with multiple locations in the southwest Missouri area.  Doug and his team are dedicated to delivering the highest quality optics and eye protection at the best price.  For more information regarding Vicious Vision, its family of products or where to purchase, visit Vicious-Vision.com.