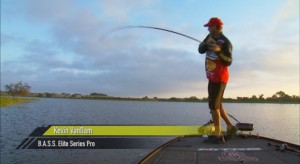 One thing is for certain, the name Kevin VanDam is synonymous with crankbaits.  Well, technically, he is known for his overall power fishing prowess, but he has won more Elite Series events than anyone else, and a vast majority of them have come on one sort of crankbait or another.

Thanks to our partnership with Strike King Lure Company, we are able to re-air the 2011 episodes of their popular Pro Team Journal shows, and this time we climb in the boat with VanDam as he put the KVD 1.5 an 2.5 squarebills to work.  It’s rare for an everyday angler to get to spend a day in the boat with an Elite Series pro, but with this format, we get a glimpse into how VanDam makes the squarebill such a deadly tool.

Grab a seat and learn from VanDam in this episode of Strike King’s Pro Team Journal.