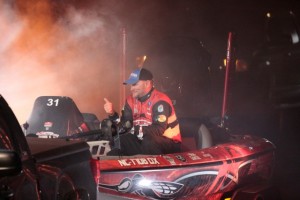 At the start of the 2013 Bassmaster Classic, the hardcore fishing fan may have known the name Hank Cherry, however, it is unlikely that the casual fan knew his name well.

Cherry had a history of being competitive on the pro tour.  With a solid resume on the FLW Tour, FLW Regional events and of course a win on the Bass Pro Shops Bassmaster Southern Opens to qualify for the Classic, Cherry has shown an ability to put his best foot forward.

With names like Mike Iaconelli, Skeet Reese, Kevin VanDam, Edwin Evers, and Mike McClelland being the popular names and favorites for the event, Cherry was barely recognized by most.

By the end of the 2013 Bassmaster Classic, that would change.

Pre-Practice
While much of the field spent several days on Grand Lake before the lake went off limits, Cherry said that he preferred to do his research at home.  “I’m one that does better with less time on a lake,” he said.  “I don’t like to see a lake beforehand because I can’t stay on the pattern because I’ve seen too many spots on the lake.”

Instead of hands on visitation, Cherry said he likes to relay on Internet methods of searching the lake.  “I like to do as much research on the Internet as possible,” said Cherry. “I look at local fishing reports and tournament results, and I use Google Earth to scout the surface of the lake as much as possible.”

His research gave him some basis to start with for understanding the lake, but some of that fact finding was not going to help him.  “I found that the lake was dominated by the Alabama Rig throughout the winter and early spring last year, but we can’t use those in the Classic or the Elite Series,” he said.  “I also found that the lake was a really good jerkbait lake, and after my research, I figured that the jerkbait would be the best way to win” 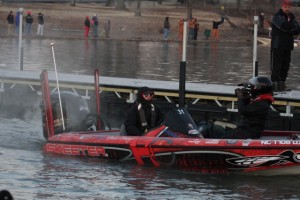 He said he had divided the lake into three parts, and would decide what he wanted to focus on when he got there for the official practice days immediately prior to the event.

Practice
Having arrived at Grand Lake, Cherry decided to look at the three zones and decide what area he would concentrate his effort on.  “I looked at all three parts of the lake, and decided that the middle section of the lake had everything I wanted,” he said.  “The area from Sailboat Bridge to Honey Creek had the right combination of cover, water color and available bait.”

With that area seated as his primary section of the lake, he went to his iPad and picked a likely point to start fishing on.  He arrived at that point, and on his third cast, he caught a six-pound largemouth, decided that was a good spot, then went about looking for similar areas where he could generate bites.

He knew that the incoming storms would not allow the water temperature to rise much, and with extremely low temperatures and blizzard conditions expected for the Official Practice Day on Wednesday, he did not expect much to change.  “I knew that the bass in this area of the country bite really well in the snow,” he said  “So, I knew that a lot of guys were going to have really good practice days, and a lot of bites were going to be had.  But, it was an abnormal day, and wasn’t going to change what I had in my mind for a plan.”

Day One
He decided to start where he caught the six pounder on his first practice day.  However, when he arrived at the spot, he found VanDam, the four-time Bassmaster Classic champion perched atop his chosen location.  “There wasn’t much I could do, so I went to my second spot,” he said. 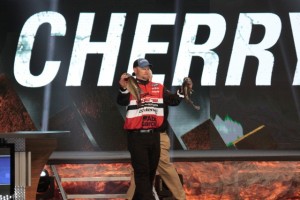 He said he had selected several different location inside Honey Creek as his areas to concentrate on during the event.  He said that he could see all of his spots from anywhere he was positioned inside the creek, but he had to get the timing right so that he hit the spots when the fish were up on them, and would strike his jerkbait.

“I had most of my weight at around noon,” he said.  “Although, I was able to make one additional cull with about 40 minutes left, I had a really good day on the water.”

He managed to hit the timing right on the first day, and came to the scales with 20 pounds, 15-ounces, good for second place behind day one leaders Cliff Pace and Iaconelli.

Day Two
He began the second day of competition with the same plan in his mind, and he stuck to it very well.  In fact, he stuck to it too well.  “I kind of got hardheaded on day two, and it cost me some bites on day two,” he said.  “I had a backup pattern that involved the stepper bluff banks on main lake points.  It’s a pattern that I’ve done really well on at home, and I should have given it a try.”

He stuck with the flatter, sloping points that had produced for him on day one, and it cost him at the scales. He came into The BOK center with a little over half of the weight he had posted on day one, but, he had hope because he knew it was a tough day, and that much of the field had stumbled.  “I saw a lot of guys running around the lake, and I knew that they were having a tough day too,” he said. “When it’s quiet out there, everyone is fishing because the bite is good.”

Even still, he found himself in fourth place, nearly 12 pounds behind the leader, Pace.

Day Three
He once again started the day on his primary pattern, but after only two fish; a keeper and a decent fish, he decided it was time to try his backup pattern.  The wind had picked up, and with several of the main lake bluff points getting direct wind, he moved across the lake.

“I told my cameraman that I wanted to try something different,” he said.  “When I got to the other spots, I caught a five pounder on my third cast, and on the next spot, caught my second biggest fish, then lost a four pounder, caught my fifth keeper and then lost one that was over seven pounds with 10 minutes left.” 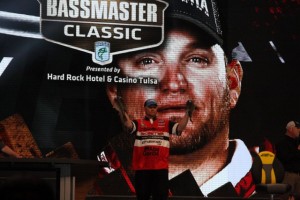 That was the end of his fishing day.  He came to the scales with 17 pounds, 4 ounces; which brought his weight to 49 pounds even; 5 pounds, 12 ounces behind the eventual winner, Pace.

Techniques and Equipment
Cherry said that he used three lures at Grand Lake; a Megabass Ito Vision 110 and 110 +1 jerkbait in Sexy Shad color, though his most productive lure of the two was the original 110.  On day three, when he went to steeper points, he turned to a Lucky Craft Staysee in Chartreuse Shad color

Hindsight
He said that he has no regrets with the way things turned out.  Even though he lost two fish that would have pushed him over the top on the final day, he knew he had gotten the bites to win, but sometimes, fish come off of the hook.  The only change that he said he would have liked to have made was to have gone to his backup pattern earlier. 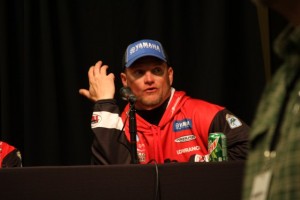 “I think that fish kind of tend to go into sunbathing mode in the afternoon after a storm front this time of the year,” he said.  “If I had gone to the steeper points, I may have gotten a few more bites on day two, but other than that, I fished the way I wanted to, and had I executed, I would have won on the final day; I can take some pride in that.”

Final Thought
He said that he enjoyed his first Bassmaster Classic, and while he felt very good about his ability to control his emotions in the biggest event of the year, he admitted to getting nervous when pulling into The BOK Center for weigh-in.  “There really has been nothing like that in my fishing career,” he said.  “That’s when it all became very real, and the amount of people in there make you realize the stage you’re on; it was amazing.”