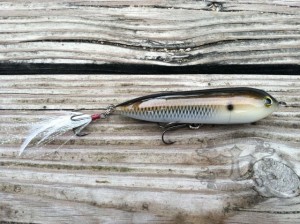 Boing Lures, manufacturer of the easiest-walking, most natural sounding topwater lure on the bass market today, intends to make a major push in 2013 to expand the product awareness of fishermen around the world. The Boing product has been around for over a decade, but under new ownership the quality of the product has dramatically improved while the price has gone down by a third, making it accessible to all serious anglers.

The Boing walk-the-dog topwater makes use of a unique sound chamber to create both high and low frequencies, thereby stimulating a fish’s sound receptors. The company has recently teamed up with noted Arkansas custom painter Dwain Batey. Now, in addition to sounding more like a fleeing baitfish than any other lure, the Boing products will also look more natural and seductive. Combined with three-dimensional eyes, Gamakatsu trebles, and hand-tied feathers, this is truly a premium product at an affordable price. Additionally, they’re 100 percent hand-crafted in the United States.

“This is not a lure you can go into a big box retailer and see, so the general public doesn’t know about us yet,” said Boing owner Jason Yocum. “But 99.9 percent of those who’ve fished them rave about them. It’s a lure you have to touch, feel and throw to understand.”

In order to spread the word of this product’s effectiveness, Boing will wrap the boat of FLW Pro Casey Martin, who has already won three FLW Tour events as a co-angler, as well as a BFL out of the front of the boat. This year he has already earned a top ten finish in his first FLW Tour as a pro.

“Boing has a unique sound that gives me an advantage on highly pressured lakes,” said Martin. “The Boing lure played an essential role in my top 10 finish in the Everstart Championship. Additionally, the company’s management team understands the value of supporting anglers at all levels from grass roots up to the professional.”

Yocum said that “there is no classier individual out there than Casey Martin. He’s down to earth and honest and we feel that he has a tremendous upside, just like our company.”

Later this year Boing will introduce another lure to the market, one which utilizes the same noisemaking technology, but incorporates it in a different body shape. Like the original, it will be constructed of durable Lexan with a virtually indestructible sound chamber. We also sell feathered trebles and expect to have a wide range of branded apparel so that anglers can show that they’re part of the Boing team.

Be sure to stay tuned for more announcements, and never go out on the water without a Boing tied to the end of at least one of your lines.

For more information about Boing Lures, go to www.fishboinglures.com