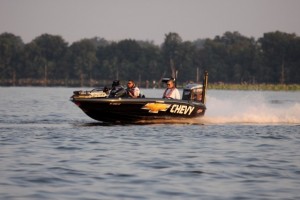 Along with that, Thrift has shown that he has the potential to win the big event too. In seven trips to the Forrest Wood Cup, Thrift has finished in the top ten seven times, including consecutive third place finishes.  While the sport tends to celebrate those who win in the instant, it rewards those who compete with consistency.

While that trait means that competitors usually look for you over their shoulders, it also means that you have provided them a lot of reason to do so.  The qualities that allow an angler to be that consistent are the same that help them locate the kind of fish to win big events.  One of those qualities is the ability to think on your feet, and another is recognizing opportunities when they present themselves.

That characterizes Thrift’s 2013 Forrest Wood Cup on the Red River.

“After my practice, I was hopeful that I would be able to catch 12 to 13 pounds a day, and from everything I’d been hearing, I was doing things backwards from everyone else,” he said.  “But, part of being competitive is being able to make adjustments, and that is exactly what happened in this tournament.”

The Shelby, N.C. angler said he spent three and a half days pre-practicing the Red River.  While many of his competitors spent maximum time on the river, he felt the waterway was such that he didn’t need that much time.  “It’s really not that big of a fishery,” he said.  “I spent a day in each pool looking around and covering as thoroughly as I needed to.”

He said he left the pre-practice period with nothing concrete decided in his mind, but he knew that he wanted to try and narrow down his area when he arrived for the event’s official practice.  He began by looking at an area known as Caspiana Lake, in pool 5.

he covered water quickly with a buzzbait, and found that he could get strikes from keeper sized bass.  The main feature was a subtle

point that seemed to be holding a large school of fish that were actively chasing bait.  He then began probing the river itself, and found that he could get quality bites with a Chatterbait.

“I was planning on doing things in reverse from many of the guys that I’d heard talk,” he said.  “Most of them were talking about limit fish on the river, but I found my better quality there; so I planned on starting in Caspiana, then moving to the river.”

Day One
He started on the little point inside Caspiana; again, throwing his buzzbait.  However, the fish never responded to it like they had in practice.  As he was beginning to think about heading towards the river, his Co-angler made a cast to the point with “some sort of Texas Rigged bait,” as he called it, and caught a five pounder.  That prompted Thrift to slow down.

He picked up a spinning rod and Shaky Head with a finesse worm and began slowly probing the point.  Ten minutes later, he caught a 7-pound, 9-ounce largemouth – the biggest of the tournament.  He managed to pick up one more keeper, and left Caspiana to head to the main river to get his Chatterbait fish going.  He covered as much water as he could effectively.  He reported weeding through a lot of fish to get the quality keepers.  “I’d fish a long stretch of bank and then hit a little wolfpack that would produce two or three quality fish,” he said.  “I had my limit by 10:00, and then went looking for more water that I could use throughout the event.” 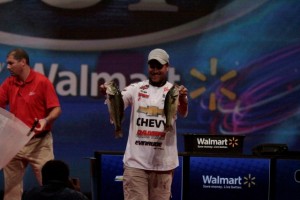 During that extra scouting time, he managed to catch a three and a half pounder, and he had his final weight for the day about 45 minutes prior to check-in.  He ended the day with 18 pounds, 7 ounces; only one ounce behind leader Randall Tharp in second place.

Day Two
Based on the big bite he had on the first morning, Thrift ran back to his little point inside Caspiana to open day two.  This time, instead of trying the buzzbait, he picked up the finesse worm and Shaky Head immediately.  He was able to pick up two 13-inch keepers and another fish about five pounds in an hour and a half.

At that point, he ventured out to the river to fill his limit with two pounders on the river again.  He filled his limit, but he never ran across the quality keepers that he had become accustomed to catching on the Chatterbait.  he ran back into Caspiana between 2:00 and 3:00PM, hoping to find one more kicker bite.  He got it, but had it jump off his Shaky Head halfway back to the boat.

“That one was close to five pounds too,” he said.  “It hurt, but there wasn’t much I could do with it.”  He headed back to weigh-in with 11 pounds, 3 ounces.  He bumped his total weight to 29 pounds, 7 ounces, and remained in second place; four ounces behind Tharp. 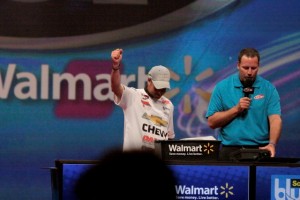 Day Three
He classified day three as a struggle.  He returned to Caspiana in hopes of another big bite; however, he did not get any bites at all.  He ran to the river and managed to catch only small keepers.  “I was really beginning to realize that I was running out of fish by now,” he said.  “Caspiana wasn’t producing, and the river was starting to clear up too much; so I was struggling.”

With about 45minutes remaining, he returned to Caspiana for one last hope at a big fish; and he got it.  He caught a four and half pounder on the Shaky Head, and returned to the weigh-in with 9 pounds, 15 ounces; bumping his total weight to 39 pounds, 6 ounces.  While it was his lightest weight so far, it was enough to vault him over Tharp, who also faltered.  He now found himself in the lead by four ounces.

Day Four
He almost gambled and took a chance and made the run to pool 3 on the final morning, but he worried that battling the locks would leave him short of fishing time, or worse.  He decided to make one more run at Caspiana looking for the big bite he’d been able to get on each competition day.

But, after giving it a fair chance, he had yet to get a bite, and returned to the river; where he caught a small limit.  After getting his limit, he would bounce between Caspiana lake and the main river for the rest of the day, but he was unable to make any improvement.

He came to the scales with a 6-pound,11-ounce limit and fell to third place with a total of 46 pounds, 1-ounce. 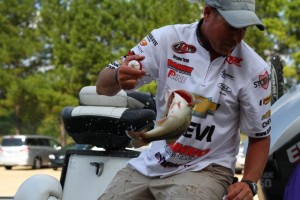 Turning Point
While he would like to go back and make the decision to try pool 3 again on the final morning, Thrift said the biggest turning point for him was his Co-angler catching the big fish on the first morning.  “This would have been a very different event for me had I not seen what the fish were doing,” he said.  “By getting the clue to slow down, I was able to catch the 7 pounder and three other big fish in the tournament; I doubt I would have one that without slowing down.”

Equipment
His two primary lures were the  Shaky Head and the Chatterbait.

He caught all of his big bass on an 1/8-ounce Evercast Lures Shaky Football Head and a 6.5″ Damiki Finesse Miki Worm in Watermelon Candy with the tail dipped charteuse.   He tossed it on a 6’10” medium light action spinning rod and spinning reel spooled with 10-pound-test P-Line 100% Fluorocarbon line.

He threw his green pumpkin 1/2-ounce ZMan Chatterbait with a soft jerkbait trailer on a 6’9″ medium-heavy casting rod and a 7.1:1 retrieve speed reel spooled with 20-pound-test P-Line 100% Fluorocarbon line.