â€œTodd Baker was the only one of us kids that could pedal his bike all the way up this hill,â€ said bass fishingâ€™s funniest man, Gerald Swindle, as he slowly drove his Tundra down memory lane on a Blount County, Alabama back road that used to be dirt.

Todd Baker was one of Swindleâ€™s best childhood friends. Bakerâ€™s thighs and heart served well in pedaling up hills, and later for picking up first downs as the fullback on their small Locust Fork High School football team in the late 1980s. 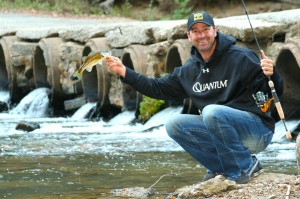 Memories flood in like a late-May downpour as Geraldâ€™s truck approaches what locals call Low Water Bridge. â€œThis is it. This is the stream that taught me a lot of what I know about catching bass. Itâ€™s the first fishery I ever learned. Itâ€™s the place where I learned that if it rained and muddied the water, I had to use a chartreuse colored crawdad crankbait rather than the natural green or brown colors in order to get a bite,â€ said Swindle, winner of the 2011 Bassmaster Southern Open at Lake Toho.

â€œThis was a teaching ground. It was the first place I ever learned to twitch a topwater with one of my daddyâ€™s hand-me-down reels. This spot right here below this bridge is really where I learned to fish,â€ reflected Swindle, who can sink just as deep into sentimental memories as he can a TV show on Comedy Central.

During the short 30-minute outing, the smooth-operating lightweight reel helped Swindle catch five little Locust Fork bass. Mostly, it landed him a bucket full of perspective. It provided him the chance to plug-in lifeâ€™s ground wire — at a place where perspective is rooted in dirt roads with big hills and small incomes.

You could tell his heart and soul were at ease. He was grateful and simultaneously proud to be there, as he proved itâ€™s not always how much it costs, but knowing how to use it that matters most. â€œI can promise you this,â€ said Swindle. â€œTodd Baker wasnâ€™t able to pedal to the top of that hill because his bike was more expensive than the rest of ours.â€

Note: With FREE Fishing Days fast approaching in many states during a portion of National Fishing and Boating Week, June 4 – 12, top bass pro Gerald Swindle reminds us that a lifetime of fishing is often born from affordable equipment and simple situations in our earliest days as anglers.