The 2011 Forrest Wood Cup is in the books, and as most of you know by now, Scott Martin from Clewiston, Fla. claimed victory in the 17th FLW Tour Championship at Lake Ouachita in Hot Springs, Ark. Martin; a winner of three FLW events prior to his win at Ouachita, put together a strategy that may rank as one of the most strategic victories in the sport.

Martin opened round one of the event with a 19-pound, 2-ounce limit that earned him the lead after day one. His day to creel of 11 pounds, 9 ounces on day two saw him slip to second place, but a 16-pound, 1 ounce day three performance gave him the lead back, and a 14-pound, 5-ounce final day brought his winning weight to 61 pounds, 1-ounce; almost five pounds heavier than Randall Tharp in second place.

In a tournament that was expected to be won shallow; Martin went against the grain and found an offshore program that relied on deep brushpiles and aggressive suspended bass that were chasing baitfish suspended in the water column. His winning program proved to be a two pronged approach that alternated between four lures that fooled his winning creels. 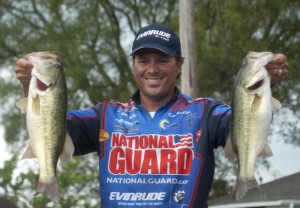 Martin, the 37-year-old National Guard team member showed that going against conventional wisdom can prove to be successful if an angler sticks to his guns and allows his patterns to fully materialize. “I didn’t plan on fishing the way that I did when I came for practice,” said Martin. “But my first day of practice really eliminated everything that I had planned on doing and made me stick to what I had found on the first day.”

Practice
Martin reported spending two days immediately following the final FLW Tour Major at Pickwick Lake as a pre-practice scouting period. What he spent that time doing was mark offshore brushpiles on his Garmin GPS units. Those two days helped him develop a practice strategy that would have him looking deep on day one, chasing shallow bass around the bluegill spawn on day two and then a final day of targeting shallow grass.

He never left his day one practice strategy for more than a couple hours.

“The first two fish I caught off of brushpiles on the first day of practice were a four and a five pounder,” said Martin. “I got those two bites in one area, then moved around to some of the other areas I found brushpiles and even while shaking off most of my bites, I still put a 22-pound limit in my Ranger on the first practice day.”

While he practiced, he noticed a large procession of boats running in and out of the shallow pockets looking for bass that were taking advantage of the bluegill spawn. “I saw boats go into coves, and another one go in the same one right after they left,” he said. “What I also noticed was that there were not any of the boats fishing the deeper water.”
After taking a quick look at the shallow programs, he decided to focus on the deep fish. “My decision was based on the quality of fish I was encountering,” said Martin. “It also was based on the fact that I really had it all to myself.”

Winning Tools
Martin had four different tactics that produced his winning weight. When the fish were up on the tops of the brushpiles or suspended in the water column, he used a pair of swimbaits. The first was a Fish Head Spin with a 3.5-inch Yamamoto Swimbait in Blue Pearl color or a 7/16-ounce leadhead rigged with a hollow bodied swimbait. He threw both swimbaits on a 7’11” medium heavy action Kistler Custom Z-Bone rod that he had custom made to his specs. He used a 6.4:1 retrieve speed Revo STX spooled with 10-pound test Seaguar Invizx Fluorocarbon line. 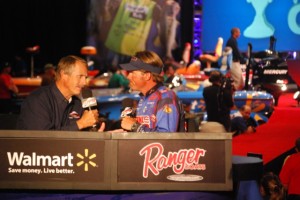 When the bite got tougher, he turned to two different bottom bouncing techniques. The first was a dropshot finesse worm that he rigged on Spiderwire Braided line and an eight-pound-test leader of Seaguar Invizx Fluorocarbon. He used a 5/16-ounce tungsten dropshot weigh and a finesse worm on a 1/0 TroKar TK180 Light Wire Finesse hook. His rod choice was a 7’ Kistler Z-Bone matched with a Shimano Stradic Ci4 reel.

Day One
The anglers were greeted with less than seasonal weather on day one. What had been high skies and hot conditions proved to be cooler, with clouds and rain. That made for what Martin called perfect conditions for fishing.”

Even with the “good fishing weather,” Martin said his first day surprised him; not because of the weight he caught, but because of where he caught them. “I had planned on using what became my primary area as a spot to get a good limit, but the fish changed,” he said. “Where I’d caught three pounders in practice, the four and five pounders were what I caught there.”

So, after only three to four hours of fishing, Martin had what he thought was around 22 pounds in the boat. “My day was pretty much done already,” he said. “I knew I could have stayed there and caught a bigger sack, but I didn’t want to burn up my area; which was about the size of a football field.”
So, he turned to scouting some of his other waypoints, and looking for new areas. 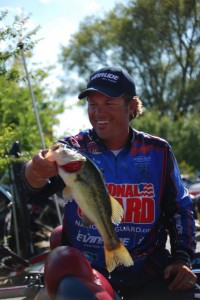 Day Two
The second day of the event did not prove to be as successful for Martin. The windy, cloudy, rainy weather gave way to high sun and flat water and it forced Martin to make an adjustment. Instead of catching the aggressive fish that he was catching on the day one, Martin said he had to grind his day out with this dropshot rig and a big worm.

“I tried the swimbait, but I just wasn’t able to make them bite in the high skies, so I had to milk my area for what I had,” he said. “I started to worry that my areas might have been fished out, or that I had overestimated their quality.”

Day Three
When the conditions turned into a mirror of the first day, Martin once again found out how effective his area was, he was able to produce quality bites and string together a 16-pound limit that would vault him into the lead again.
Relying heavily on the swimbait combos, he learned that his area was holding the right fish, he just needed to adjust with the conditions.

Day Four
Armed this time with the knowledge of how the fish moved with weather changes, Martin found that the sunny and flat conditions put his fish tighter to the bottom again. Instead of trying to force the swimbait bite, he turned to his dropshot and big worm programs to post 14 pounds and claim his victory. 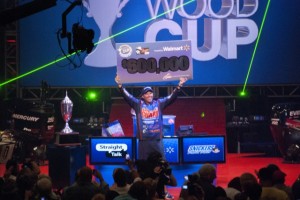 Turning Point
Martin said that the only easy day of fishing he had was the first day of the tournament. After catching many bass on the first day, he was forced to struggle through grinding days. “I was able to catch six to eight keepers a day,” he said. “But, the quality was good enough that it really kept me interested in the areas.”

He said that when he got his first two quality bites on the third morning of the tournament that his areas had the right kind of fish, and that he just needed to capitalize on his learned knowledge of their response to the conditions. “I started to piece together that they were more active with the cloudy conditions, and they would go to the bottom in the bright skies,” he said. “Once I realized that, I had all of the tools and information I needed to catch the kind of bass I needed.”

Seeing the Way
Along with the gear he used to fish with, Martin gives a lot of the credit for his win to his Garmin GPS units. “They really were an edge for me out there,” he said. “They have a feature on them that provides a measurement to the nearest waypoint, so I know where and how far to cast,” he said. “Being able to pinpoint the brushpiles, and then back off and fish them really helped me in this event.”

Funny Side Note
Martin said that he used a tool in this event that is normally a shallow water tool to help camouflage himself from other competitors; those were his Power Pole Shallow Water Anchors. “I’m the only National Guard Wrapped Ranger out there with dual Power Poles on my boat,” he said. Brent Ehrler runs the Talons and Mark Rose doesn’t have them, so I was pretty obvious out there to anyone that saw me.”

He decided to try and disguise himself, even though he was in deep water. “I lowered my Power Poles into the water so that people wouldn’t know it was me out there,” he said. “I was sitting in 35 feet of water with my Power Poles down so that no-one could easily spot me; I just kind of thought that was kind of funny.”

The Good Stuff
Now that he has won the biggest championship FLW has to offer, Martin said he is able to look at it with some perspective. “This is truly an accomplishment I’m proud of,” said Martin. “But, the money will only last so long and the trophy will tarnish, but the title is something I will always be able to wear.”
“
But, the best part of the whole thing was to win it with my mom and my dad there,” he said. “My mom fished Bass ‘n Gals and my dad had a long and historic career that was full of awards, but didn’t have the big championship win. To win that for him, and to have him there to hug me with tears in his eyes and tell me he was proud of me, meant the world to me; it’s something I’ll never forget.”