Fishing with the Big Boys

Editor’s Note) Each year, regional tournaments bring anglers together searching for a fresh start for their hopes and dreams. Among those are any number of anglers who could be the sport’s next Cinderella story. The tale of the long hot getting over motivates people and warms the heart.

Many of those fresh new faces enter the Co-Angler division of B.A.S.S. and FLW tournaments across the country, and one of them made good a couple of weeks ago at the FLW Everstart Series Western Division season finale at Clear Lake. 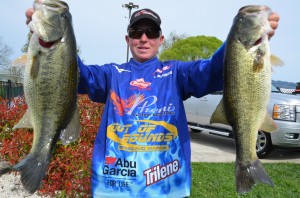 Travis Bounds is a 17-year-old High School Senior from Roseville, Calif. His father John is the owner of a Marine Service business named Out of Bounds Speed and Marine. Travis started fishing a B.A.S.S. Federation Nation youth club several years ago, and has been fishing semi-pro team tournaments, and last year began fishing as a Co-Angler.

he fished two events his first year, and had a second place finish at Clear Lake, then in his first full season, he finished the year with a win. For someone who hopes to build a career in fishing after he finishes his college years at San Jose State University, Bounds is on his way.

We asked him to tell us how his week went in his own words, and what follows is his story.

The time finally arrived for the meeting to begin where we would find out which Pro we were paired with for day 1. It seemed like forever before I heard my name but finally I heard “Travis Bounds, Boat #39 is paired with Chris Jimenez”. I was very excited to speak with Chris and get an idea of what his game plan was for the first day of fishing. We had a lot of the same ideas so I felt confident that I would have a good start to the tournament.

After a restless night sleep, I met up with Chris at the launch ramp at 6:15 am. We both were checking the weather forecast to see what Mother Nature had in store for us. According to our phones, the day was going to be fair but it didn’t take any time at all to see that the weather report was wrong.

After a couple of hours of bouncing around up north, we decided to gamble and go down south which we soon realized we were in for a really rough ride. The winds were so intense it took us 20 minutes of going over four- foot rollers, breaking the glove box and even the windshield flying off, but we never gave up and we finally arrived at our spot that has been known to produce.

Luckily it was out of the wind so we were able to spend a lot of time there. I ended up pulling four fish out of the spot in less than an hour; which is a rare feat for a co-angler. After moving spots one more time, I finally got my limit but the weather was not easing up.

I did cull a couple more times moving further down south but we soon realized that we had a long trip back. We knew our weigh in was at 3:10 but at 2:30 we decided to head back just to be safe. With a combination of eight-foot waves and 30 mile an hour winds the trip that should have taken us 15 minutes, took us nearly 45 minutes and we made it with only moments to spare.

We were very relieved to make it to the weigh in. Not only because we had decent bags that will keep us in the hunt but we were very excited to be on dry land. I weighed in 17 pound 15 ounces for day one.

After the weigh-in, I saw that I drew Shaun Bailey for day two and I knew I was in for a real treat. He is one of the best swimbait fisherman on the West Coast and suddenly I couldn’t wait to get back on the water again.

Once again I had a bad night sleep; but, this time it was because I was coming down with the flu. When I woke up I was so congested and was having a hard time breathing I wasn’t sure that the day was going to go as smoothly as I had planned but I was going to give it my best shot.

After stopping at our first spot up North we knew our best chance at a big fish was going to be down south so through sneezing and coughing, we traveled the easier route down south. Luckily the weather had changed and the water was much calmer.

When we reached the Rattlesnake arm we were able to put a couple of quick keepers in the boat and I knew that we both had a good shot at bringing in a good bag. 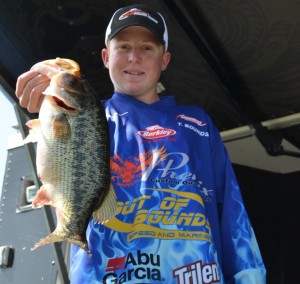 Though my adrenaline was pumping, I felt really horrible and wanted to sleep. I did need to sit down a couple of times and try to catch my breath but, I never gave up and would get right back up and back to fishing.

Shortly after taking a quick break to catch my breath, I caught 2 nice fish on a ledge which put me at three fish for the day. We then found a cove where there were some nice ones and I was able to get my limit. We decided to go across the lake to a spot where Shaun had caught fish in practice. But when we came around the corner, we saw that an 18 wheeler had rolled off the freeway and into the lake right on our spot. Shaun looked at me and said ”well I have never said this before but there is an 18 wheeler in our fishing spot”.

The sheriffs told us that we had to leave the area so we went ahead and moved on to our next spot. After catching a couple more nice ones in our new spot and culling a couple of time it was once again time to head back to the weigh in.

The trip back didn’t take us very long so we decided to stop one last time. At this stop I was able to catch my biggest fish and cull out one last time. I weighed in 20 pounds even which brought me up to fifth place allowing me to make the cut and fish Saturday.I was very surprised and happy when I heard I had pulled Mark Crutcher and I knew it was going to be a great day.

Once I got some good medicine in me, I was feeling much better and was able to get a little better night sleep, though my mind was going in a million different directions. I felt that I had a really good chance of winning the whole thing and I just couldn’t wait to fish on Saturday.

FLW allowed us to launch a little earlier today which helped me get off to a better start because I caught a fish on my third cast. Right away I knew, it was going to be a great day. We moved from spot to spot and picked up a couple good ones here and there.

It seemed like every spot we went to was producing but not as well as Mark’s favorite spot. Once we hit the favorite spot we both were able to catch good limits and knew we still had a lot of time ahead of us to catch some toads.

We caught a lot of fish throughout the day and each one seemed to increase in
size. It was such a fun feeling and I knew I had a good chance to win. After Mark caught his seven pounder we were both able to hook up at the same time and were able to cull once again.

It was just amazing. Before leaving our last spot Mark looked at me and said “you really got a shot at this kid” and it was the best feeling in the world.
The ride back was long because I was so excited and couldn’t wait to weigh in.

Once we got in the five mile an hour zone we had to check in and wait for our bags which seemed like forever. Once we finally were asked to put our fish in the bags and take them to the tanks I could feel the adrenaline go through me.

Because I was in fifth place at the beginning of the day, I had to wait for the bottom five anglers to weigh-in before I had my chance. When it was finally my turn I took my fish out one by one and could feel my heartbeat in my hand and I placed the fish on the scale. I was so nervous and excited all at the same time. When the emcee said I was “fixin to put a whoopin on the big boys” I thought to myself, “and he doesn’t even know that the fish I still have in the bag are even bigger. I ended up weighing in 23 pounds, 8 ounces and went all
the way to first place. I had to sit in “the hot seat” while the next four anglers weighed in. One by one they all had to weigh-in but they all ended up coming up short.

When the final angler came on stage and pulled his second fish out which was about a pound in weight, I knew I probably just won. Though it was exciting to see him pull out the next three fish, before the scales showed his weight, I knew I won. Adrenaline ran through my body from head to toe but I knew I needed to stay calm and hold my composure. Holding the trophy over my head was so exciting and an absolute dream come true.

My main weapon for the event was a dropshot rig, but I had another bait I used as a search bait. First I would throw a River2Sea SWaver to get fish to show themselves, then I would turn to the dropshot. I threw my dropshot on a 7′ Ultra MBX Phenix Rod with an Abu Garcia Orra spinning reel. I used eight-pound-test Berkley Trilene 100% Fluorocarbon and a River2Sea tungsten Tear Drop drop shot weights rigged with a variety of baits.

I am also sponsored by Eye Surrender and Out of Bounds Speed and Marine; my dad’s boat shop