This ended up being another good day at Kentucky Lake. We’ve got 125 anglers fishing in this Bassfest Elite Series event. Today, I had more than 19 pounds, and I moved up from 48th place to 36th. So I made the cut and move on to Saturday’s third round.

But the day didn’t play out the way I thought it would.

A rock ledge that was so productive on Day 1 just didn’t yield the fish today.

Yesterday, I wrote a blog about what it was like fishing a small ledge with six other guys. On that ledge, we were all catching fish, and all six of us were going back there to start today.

I was kind of concerned about whether the guys that had gotten there first on Day 1 were going to be upset this morning when they found that Bobby Lane and I had taken their sweet spots from yesterday. Bobby and I were seeded in the 80’s on the first day, so we didn’t get a chance to fish the best place. Today, the boat draws flip-flopped, so Bobby and I were first on the scene.

Sometimes it upsets anglers when you take their spots. They think the location they fished the day before still belongs to them. But today it was Bobby’s and my turn.

But it was cool. Nobody was upset.

The reason nobody was bent out of shape, however, might have been because nobody was catching any decent fish.

Bernie Shultz had a couple of bites. I caught two tiny fish. (I had three pounds at 11 a.m.) I think almost everybody else on the ledge caught at least one, and some of us had a few other almost catches. But the bottom line was that by 11, we’d all given up on the ledge and moved on.

That ledge created a funny dynamic. We’re out there in the same general area most of the morning, all close to each other. And it seemed like there were more fish caught than there were, because every 15 or 20 minutes somebody would get a bite. It was a false sense, though. You’re talking about six people catching fish, not one. 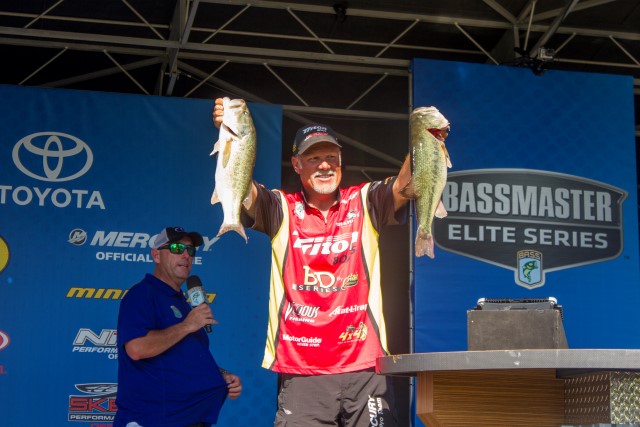 I guarantee you than any one of us, if we’d been there by ourselves, would have given up on the ledge by 8:30. But because somebody in the group of six would catch something, we hung in there longer than we should have.

Eventually, Brett Hite left and caught 23 pounds somewhere else. Andy Montgomery hadn’t caught a single fish. He left and had a good day. So did Stetson Blaylock.

As I said, I pulled the plug at 11 o’clock with three pounds in the live well.

I had to go scrambling. So I started running points. I would idle from grass bed to grass bed. At one point, I got on a school. I took my big spoon and within 10 casts I had caught a 6-6 and 4-and-a-half.

That will improve your outlook.

So it ended up being a pretty good day. Overall, though, something weird is going on. The personality of Kentucky Lake is different.

The scene is almost like it was at Guntersville when we fished there. The lake was different. At Guntersville, all the places that the Alabama “home lake” guys knew would be productive might as well have been dry holes.

It’s like that here. There are guys in this field that smash them every time we come to Kentucky Lake, and they aren’t catching anything. Ledge fishing is usually the way to go, but it’s just not happening this week.

There is a group at the top, though, that has figured something out. I don’t know what they’ve found. Maybe it’s a shallow pattern.

I’d like to figure something out between now and Saturday. Thirty-sixth is ok, but I wouldn’t mind moving up  another 10 to 15 places.