I actually pre-fished the California Delta. It takes planning and effort for a guy in Alabama to spend a week out west fishing two locations: the water around Sacramento, California, and Lake Havasu in Arizona.

Those are our next two BASS Elite Series tournament stops. I wanted to be ready, so I came here to the Delta before the cutoff dates and took a look around. Time will tell whether that pre-fishing trip did me any good. Right now, it’s hard to tell.

At practice on Monday I caught about 12 pounds, which doesn’t sound great. Then you throw in the fact that I fished for about 12 hours. We’ll probably have four hours of fishing time on Thursday, our first day of competition.

That might sound like an exaggeration to say we’ll only have four hours of fishing time, but, in reality, four is optimistic. On my trip here a few months ago, the thing that struck me is how big the Delta is. It will be a long run from our launch in Sacramento to a productive fishing area. 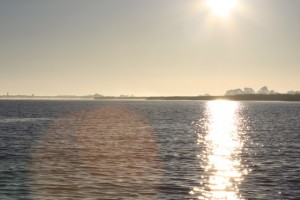 Franks Tract on the California Delta – photo by Dan O’Sullivan

Every boat in the field will be flying south. Most will go between an hour and a half and two hours to get to spots on either the Sacramento or the San Joaquin rivers.

And by the way, with a long run like that, you also have to figure in a fuel stop. That takes another bite of time, because everybody in the field will need to fill up.

You also have to take into consideration the inland tides and the wind patterns that blow up into the Sacramento Valley. Both affect your fishing strategy and your trip.

What I’m seeing is the possibility that boats are going to stack up on two productive places: Frank’s Tract and Big Break. Even with all of that water, which includes canals and backwater, I still believe most of the field will be looking at those two spots, because they believe they can catch some giant fish there.

Reporters will tell you about the huge fish that are caught in the Delta, and they’ll ask if we think it’s possible to see a bunch of 30-pound bags this week.

What I see is 113 boats – remember, it’s not 100 in the Elite Series anymore – cramming into just a few areas, and those areas getting really small.

Maybe a 30-pound bag is possible. But I’d say a 12-pound bag during this event will make an angler proud.