This week â€œIkeâ€ is jumping into his Toyota Tundra and towing his boat from his New Jersey home to famed Bristol Motor Speedway. Itâ€™s doubtful heâ€™ll be wearing the custom fitted fire suit along the 516 mile drive, but Iaconelli is indeed blazing with excitement to return to NASCARâ€™s inner circles.

In the case of Bristol, itâ€™s a small â€˜circleâ€™ that provides the most exciting short track race of the year. Iaconelli will be at Bristol to sign autographs for race fans, as well as to get an inside look at Truexâ€™s world on an actual race weekend. Ikeâ€™s Tundra and boat will also be on display for the 160,000 or so fans that fill one of the largest sports venues in the world. 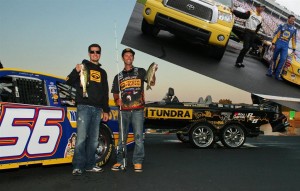 â€œI gotta be honest, until recently, I wasnâ€™t much of a NASCAR fan,â€ said Iaconelli. â€œBut based on my experiences with Martin Truex Jr. last year in Charlotte, and what some of my buddies have told me about Bristol, I canâ€™t wait to get there,â€ said Iaconelli.

â€œIâ€™m also excited just to go and observe how they have grown their sport so big in a fan friendly way. My goal at Bristol is to watch, learn, have a good time and bring some of that experience back to fishing,â€ added Ike. â€œI also know that a ton of NASCAR fans love to fish, so Iâ€™m looking forward to talking fishing with the race fans too.â€

Martin Truex Jr., driver of the Michael Waltrip Racing No. 56 NAPA Auto Parts Toyota Camry, reciprocates excitement for Ikeâ€™s return to NASCAR. â€œMike is a pretty intense guy when heâ€™s fishing and it will be pretty cool to bring him into our world at an actual race and show him just how intense NASCAR racing is, especially at Bristol,â€ said Truex, who like Iaconelli, is also a New Jersey native.

In addition to sharing the same home state, Truex shares Ikeâ€™s love of fishing. â€œI caught a lot of smallmouth in Traverse City before the Michigan race last weekend. I do pretty good fishing on my own, but of course heâ€™s a pro, and heâ€™s real good, â€œ said Truex in reference to Iaconelli, the 2006 Toyota Tundra Bassmaster Angler of the Year.

Truex, who heads to Bristol sitting 21st in the Sprint Cup standings, continued, â€œIf anything, Iâ€™d like to ask Mike when he wants to go fishing again. Heâ€™s a lot of fun to hang out with; heâ€™s a good dude. Plus, heâ€™s a Phillies fan, and heâ€™s from Jersey too.â€

No doubt, lots of anglers love NASCAR, and thousands of race fans love to fish. It should be a great weekend at Bristol Motor Speedway for Truex, Iaconelli and the fans that share their love of shaky head lures and fast laps on a short track.