Itâ€™s Shannon Fontaineâ€™s job to wake everybody up each morning at the Bassmaster Elite Series events. Fontaine, a disc jockey from Wetumpka, Alabama, is contracted by B.A.S.S. to travel the tour and spin tunes at sleepy-eyed tournament launches, and again later in the day as pros cross the weigh-in stage. And itâ€™s obvious; heâ€™s the perfect person for the job.

Today, in the pre-dawn hours on a wooden dock near Palatkaâ€™s Memorial Bridge, Fontaine could be seen dancing an Irish jig, and spinning Irish tunes such as â€œToss The Featherâ€ and â€œTo The Quick.â€ He also passed out Erin Go Bragh buttons to anybody with enough St. Pattyâ€™s Day spirit to pin one to their hat or shirt. â€œI mean câ€™mon, with a first name like Shannon, you gotta love St. Patrickâ€™s Day,â€ grinned Fontaine.

Itâ€™s obvious Fontaine loves his job. He loves bringing atmosphere to an often electrically emotional sport that can be mis-perceived as passive. â€œPeople might think that pro anglers would all listen to country music,â€ said Fontaine, â€œBut thatâ€™s not at all the case. The pros tell me what song they want me to play when they enter the weigh-in stage, and it ranges from KVD wanting Saliva (rock) to Skeet requesting Wiz Khalifa (rap).â€ 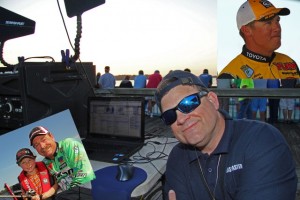 And if St.Pattyâ€™s Day wasnâ€™t cause enough to celebrate, how about the fact that one of Shannonâ€™s three kids was born on March 17th? But no matter what the date, if thereâ€™s a Bassmaster Elite Series tournament taking place, Fonatine will be there, arriving the day before each tournament begins, not leaving until long past its conclusion, and adding upbeat atmosphere at all hours in between, even at 6:30 a.m..

Speaking of upbeat atmosphere, when local Palatka pro Terry â€œBig Showâ€ Scroggins crosses the weigh-in stage each day the cheers are loud enough to drown out tunes from Fontaineâ€™s D.J. booth. The people around the St. Johns River love Terry Scroggins, and for good reason, heâ€™s the kind of guy all of us would love to have as a neighbor. Humble, helpful, generous and fun, Big Show has a big heart.

But ironically, if not for Bassmaster Magazine, â€œBig Showâ€ might still live in Illinois.

It was a brutally cold winter in 1978. Snow was up to the mailboxes in Illinois, and Scrogginsâ€™ dad was frustrated past his ears by long winters. He literally turned to Terryâ€™s mother and told her to start packing, and put the house up for sale. When she asked where in the heck he planned to take the family, the father simply replied â€œWell, I read in Bassmaster Magazine that the fishingâ€™s great on the St. Johns River in Florida.â€ He was also fairly certain snow wouldnâ€™t be an issue in northeast Florida. Strange as it sounds, Ma Scroggins swears itâ€™s true. â€œWe moved here because of the river,â€ she said with a smile. And Bassmaster was their roadmap.

As the son of a former University of Florida professor, Shaw Grigsby has always called Florida home, and like Scroggins, he too has a huge heart and a deep connection to family. In fact, one of the highlights of Grigsby being close to home this week is having his only grandson, and favorite fishing buddy Bryce here to greet him at the end of each competition day. Whether Grigsby has a bad day like he did on Day 1, or busts a 23-pound limit like he did on Day 2, Bryce is there to cheer, and Grigsby canâ€™t wait to see him.

Part of Grigsbyâ€™s massive 23-pound limit yesterday came during lunch when he caught a 7-pounder while eating a turkey wrap. â€œI sat down to eat one of those turkey wraps that Ken Hoover (a sports nutritionist) gives us, and casted at a big one on a spawning bed. She bit, but my hand was out of position because I was trying to eat, and I accidentally hit the thumb bar of my EXO reel and backlashed it on the hook set — she got off,â€ said Shaw. â€œSo I put my turkey wrap down, fixed my line, casted to her again, and she bit again. She weighed 7-pounds,â€ laughed the happiest guy on tour in a state of amazement.

If St. Patrickâ€™s Day is as lucky as yesterday was for Grigsby, itâ€™s fair to say he may be dancing a jig on the weigh in stage.