Finessing the Grass with John Murray

Anglers all over the country face a common adversary. One that can be quite a challenge to overcome; but once they do, it can be a tremendous ally. That enigma is aquatic grass, and it can be a bass angler’s best friend, or their worst enemy. 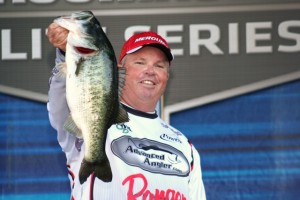 When nearly an entire field of anglers is pounding the grass with the big rod, a big weight, heavy braided line, giant hook and a creature bait, bass can almost become shell shocked. The sight of tournament boat after tournament boat floating at the edge of a grass mat can put largemouth into hiding.

Phoenix, Ariz. Elite Series pro John Murray has an answer for those times.
Murray is an avowed structure angler, and the often unruly conditions of the fisheries of the West have helped him learn that an angler had better be ready to do one thing; make adjustments. “The amount of pressure our lakes receive almost makes being able to handle light line fishing mandatory,” said the Lucas Oil pro. “But, the one thing that it really means is that I have to be ready to adapt quickly, and I have applied that concept back East.”

So, when Murray is faced with a situation like the above, he often turns to his Western roots and does one thing – go light.

Light Line, in Grass?
Murray explained his approach to “finessing the grass” like he expected to hear some sort of alarm going off signifying his need to return to the insane asylum. “It doesn’t sound like it makes a heck of a lot of sense,” he said about finesse gear in grass. “But, the truth is, if you can’t get the bites, you have no chance to catch too may bass, so I downsize.”

That downsizing means going lighter than any sane person who thinks of 65 to 80-pound braided line might even think of going. “I’ll throw eight-pound-test fluorocarbon line in grass,” Murray said. “But, I make adjustments to my gear in order to make the most of the opportunity.”

Reading Grass
Murray said that what tends to happen as anglers bombard the grass canopies is that bass respond by moving away from the outside edge of grass mats. He said his first choice is to lighten up and try to pick of isolated fish on the outside edges, but he often needs to move inside the edges.

“Bass usually move away from the pressure, and in grass that means the move to inside edges or in pockets around deeper grass,” he said. “While I like to use heavier tackle in that situation, the fish will still be really line shy, so I have to dial it down; but, still pitch it into the heavier areas.”

What Rig?
While most anglers use a heavy Texas-rigged lure in grass; Murray goes all the way to the finesse spectrum when he needs to scale down. “There is no better setup for getting bites in tough conditions than a dropshot rig,” said Murray. “I use a short; two to three-inch leader so that I present the lure well, but still have the ability to shake the lure in one place.” 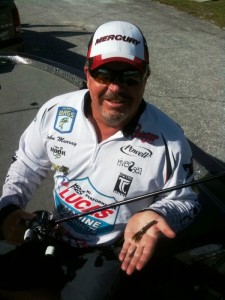 He favors two lures for the technique; a three-inch Wave Worms Grass Craw and a five-inch Tiki Stick. He prefers to use darker colors around grass; favoring watermelons and green pumpkins in clearer water, and turns to black and blue and junebug.

Finesse Grass Gear
“I’ll throw as light as eight-pound-test fluorocarbon line in grass,” Murray said. “The trick to being effective is to know what type of gear to use, and how to act one you have a bass hooked.” If he can get away with going with heavier; 10 to 12-pound-test fluorocarbon, he chooses a Powell Endurance 764 rod with an Ardent Edge Elite baitcasting reel; a 2/0 offset shank Owner worm hook and a 1/4-ounce River2Sea Tungsten Skinny Drop.

But, if he has to go ultra-finesse; he picks up a Powell Endurance 714 spinning rod, and downsizes his line to eight-pound-test, and reduces his Tungsten Skinny Drop to the 3/16-ounce size. “I only go that light if I can’t get bit with the heavier lines,” he said. “But, I find myself having to use that setup more frequently.”

Murray said that he uses a stouter spinning rod for this kind of presentation because he doesn’t have to swing as hard on the hookset; unlike some of the more limber dropshot rods available today.

Landing Finesse Grass Bass
Murray said that the key to landing any size fish in grass on light line is the battle. “You’re going to lose some fish on it,” he said. “But, you can increase your percentages by not trying to horse fish out of the cover,” he said. “This isn’t Flipping, where most people set the hook and winch the fish out of cover. You have to get a good hookset, and hold a steady pressure on them.” 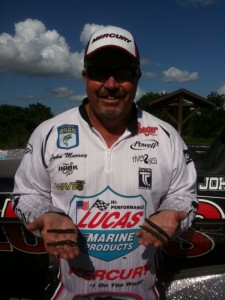 He revealed that the best thing to do is to use the grass as your ally in the battle. “I try to keep steady pressure and get them up to the surface,” he said. “A lot of times, they bury up, and you can go in and get them. Once their heads are buried up, they often stop fighting. If I try to force them out of the cover; I will break off, so I let the grass help me.

“It’s not the ultimate way to fish grass, but when I need to make them bite; it can be really deadly.”