Analyzing the Elite Points After One Event

The first event of the 2012 Bassmaster Elite Series is completed and Alton Jones has earned his first Elite Series victory. In doing so, he becomes the first angler qualified for the 2013 Bassmaster Classic via his win at the St. Johns River. Throughout 2012, eight Elite Series competitors will earn automatic berths into the 2013 Classic at Grand Lake by winning a regular season Elite Series event. 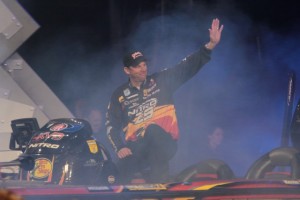 Along with those eight anglers, 30 other Elite Series pros will earn a trip to the 2013 Bassmaster Classic based on their standings in the Toyota Tundra Bassmaster Angler of the Year Points Series. The top 28 anglers in the standings will earn a trip to the Classic, and if there are double qualifiers (based on Elite Series regular season winners finishing in the top 30 in the points; or, top 28 anglers qualifying again through the Bassmaster Opens) the qualifying positions move down the standings another position for each double qualified pro.

For the 2012 Classic, there were nine anglers double qualified at season’s end. The defending Bassmaster Classic Champion Kevin VanDam, Elite Series winners Edwin Evers, Steve Kennedy, Casey Ashley, Davy Hite, Dean Rojas, Denny Brauer and David Walker; and Gerald Swindle who won the first Southern Open of 2011 and earned his berth with that win. Only Shaw Grigsby; who won the first event of 2012, did not finish high enough in the standings to double qualify.

The result for the 2011 season was that 37 anglers from the Elite Series qualified for the 2012 Bassmaster Classic. Elite Series Rookie Brandon
Palaniuk grabbed the final Elite Series qualifying spot ahead of Kelly Jordon.
Since the inception of the Elite Series, the anglers have competed under a Toyota Tundra Bassmaster Angler of the Year Points Series that awarded points for places on a graduated scale from 300 points for the winner, and gradually decreasing from there. The first five places were awarded on a five point spread beginning at 300; places four through 10 on a four point spread,10th through 15th on a three point spread, and the remaining members received a two point differential. There were also bonus points for an angler who led a day of a tournament, so it was possible for someone to earn as many as 20 bonus points in an event if the led wire to wire.

The points system changed in 2012. A committee of anglers worked with B.A.S.S. to come up with a new points system that goes back to the old “one point per place system.” Each individual place in an Elite Series tournament is now worth one point; and the winner; based on the fact that there are 99 competitors in the field; the winner now receives 99 points, and the last place finisher – if he records a keeper bass in the event – receives one point. 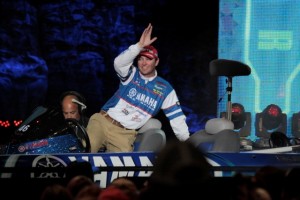 What does that mean? Does it mean that the points system is still more equitable and that the anglers will have an easier chance of qualifying for the Classic, or even winning the Toyota Tundra Bassmaster Angler of the Year title?

Let’s take a look at one past season and see if the finishes would have been possible.

First of all, I could not have come up with any of these statistics without the help of Bassmaster Senior Editor Ken Duke; the resident keeper of Bassmaster records. Without Duke; much of the tradition of this sport would fade away into oblivion as the years progressed.

Kevin VanDam opened the 2008 season with a 31st place finish at The Harris Chain of Lakes; again, according to Mr. Duke, that is the lowest any angler to have won the Toyota Tundra Bassmaster Angler of the Year award has been after the first event of the season.

VanDam won his fourth title that year after opening the season with the 31st place, a win at The Kissimmee Chain, a 45th place at Falcon Lake and a 56th at Lake Amistad. But, he was able to win the award over Todd Faircloth who stumbled badly in the season ending event; finishing 93rd and falling 88 points short of closing out the title.

Faircloth entered that event on Oneida with a 26 point lead over VanDam (2,514 to 2,488), meaning that Faircloth had – at most – a 13 place differential to play with in the battle against VanDam at that final event; if they both finished in the two point differential positions in the standings. Probably not a comfortable cushion when facing the World’s best tournament angler.

However, if the 2008 season was competed under the current point system; Faircloth would have entered that final event with a 40 point lead in the standings; and would have had to finish 39 places ahead of VanDam to clinch his first Angler of the Year title – an award nobody but VanDam has won since 2008.
For the record; no matter how you do the figures under either point system, there is no way that Faircloth bests VanDam mathematically in 2008. VanDam had an average finish of just under 22nd (21.72) place and Faircloth averaged just under 23rd (22.82). 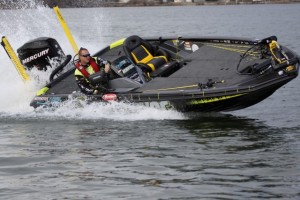 However, before that final event, Faircloth had been averaging just under 16th (15.8) place in the standings, and VanDam had averaged just under 20th place (19.8). If Faircloth had been able to have the 40-point cushion of today; might he have fished more relaxed and performed better? There’s no way to know; but it makes for an interesting thought.

However impressive; I’m not sure that it would be a possibility under the current point system. In order to qualify for the Classic in 36th place, an angler needs to finish the year with approximately 75-percent of the Angler of the Year (or regular season points leader in the case of 2009 and 2010 when the Angler of the Year was decided at Toyota Trucks Postseason amongst the top 12 in the standings).

What About Now?
Not to incite panic; because as we’ve seen from the tale of Hackney in 2008, anything can happen when an angler performs. However, when Hackney made his recovery, there were more opportunities for anglers to gain, and lose points in big chunks; I’m not sure the same is possible today. 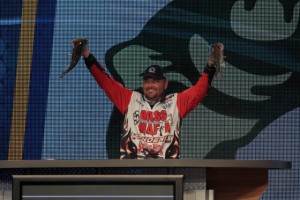 I realize that it may be all relative when looking at the positions that a whole field settle into as a season progresses, but it certainly will be a lot more difficult for anglers to make last event charges to get into the Classic when one place equals one point.

So while anglers finishing in last place under the old point system finished in 99th place received roughly 25-percent of the points as the winner (77 points as opposed to one point currently). Today that same last place finisher receives one-percent of the champion. It leaves those anglers that finished below 75th place last week at the St. Johns River at more of a disadvantage than in years past.

While I’m not sure that the current points system is as equitable as the previous one; the sure bet is, it should make for a very interesting 2012 Elite Series season.