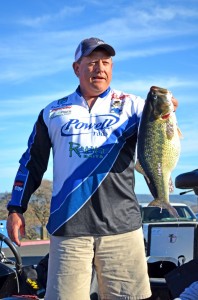 Novato, Calif. (March 17, 2014) – While fishing a California Tournament Trail Pro-Am event on February 22 – 23 on New Melones Lake in Northern California, Keith Bryan, president of Powell Rods experienced one of those moments that most anglers only dream of.

On the first day of the two-day event, Bryan hooked and landed a 10.48-pound spotted bass that helped him take the lead in the tournament with a day one weight of 21.39 pounds. Not only did it help in the tournament, but it set forth a chain of events that may end with the 49-year-old angler and businessman holding the new IGFA All Tackle World Record for spotted bass.

When weighed at the tournament scales, the fish weighed 10.48 pounds, then several hours later, it weighed less on a grocery store scale.  While Bryan thought this fact would nullify his claim to a potential record, he would later find out the scales can be certified by IGFA after the fact.  The tournament scales were sent to the organization, and have been certified as accurate by officials there.

This means that Bryan’s fish has been recorded by IGFA as the original 10.48 pounds, and is in the process of being considered for World Record status.  The process is to take a mandated 60 days from the date of the catch, so sometime in April, Bryan’s fish could become the new All Tackle World Record Spotted Bass.

“This is just an unbelievable experience,” said Bryan.  “I could never have, in my wildest dreams, imagined catching a world record of any sort.  But, to have it happen in a tournament is amazing.  I can only wait now and hope that IGFA has enough documentation to certify it as a record.  But, even if it doesn’t happen, this has truly been a once in a lifetime experience.” As icing on the cake, Bryan would also go on to win the tournament with a total, two-day weight of 38.49 pounds.

Powell Rods will provide future updates on the status of the certification of the fish as details become available.

Powell Rods is a 103 year-old company with its roots in fly fishing. In 2005, Powell introduced their Max Series of fishing rods featuring proprietary high modulus graphite Maxumfiber blank material coupled with the world’s highest quality rod building components.  In 2011, Powell followed with the Endurance Series; built on an enhanced version of their proprietary Maxumfiber blank material and teamed with premium components.   They then included the Diesel lineup in 2012, which added a value priced line of rods to the brand.  In 2013 the company introduced two new lines, the high end TiMax along with the Inferno lineup a mid range performance based line.

Each Powell rod is the product of many years of rod building experience and the expertise of our design team that couples engineering and angler input; the result is a rod that of exceptional quality and high performance demanded by anglers. The Powell focus is to provide products with the highest quality standards, backed with superior customer service. Try one and see why a Powell bass rod is the best performance and value on the planet