Mike McClelland may call Northwest Arkansas home but he’s been to the ocean-like, Smallmouth rich waters of America’s Great Lakes many times before.

So on the eve of Day One at the Toyota Bassmaster Angler of the Year tournament on Lake Michigan’s Bays de Noc he stood in the peaceful parking lot of the quaint cabin he and wife Stacy are staying in this week, listening to the wind whip across Lake Michigan less than 50-yards away, making double dog sure he had all the necessary equipment to take on this unusually rough patch of water in the days ahead. 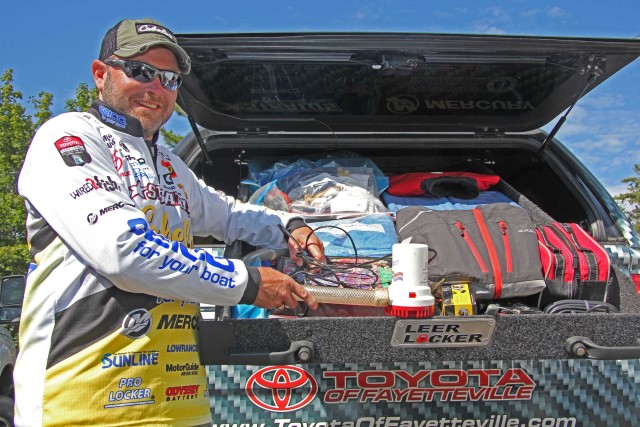 Mike McClelland – Ready Weather or Not

“My first trip to big water was to Lake Ontario for a B.A.S.S. event in 1997, I was in an 18’ boat, and there was no question you were gonna take waves over the bow,” remembers McClelland, winner of the Elite Series event this past April on Table Rock.

“I’ve got a 20’ 9” Stratos 201 Evolution now that has a really deep keel and great front end bow lift to make it the best big water bass boat possible, but still I wanna be prepared, and that starts with carrying a portable bilge pump in addition to those built in to the boat at the factory to pump out any water I might take on should I spear a huge wave,” says McClelland.

“My spare bilge sits on the floor, and it has alligator clips that I can connect either directly to my battery or an accessory switch, plus it has its own on/off switch,” he explains.

In case your doubting his cause for concern, NOAA is forecasting south winds at 10-15 mph, with possible gusts to 25 mph for Friday. Frankly, if that happens, there’s a strong chance B.A.S.S. would cancel the day of competition.

If it’s game on, McClelland plans to make an 18-mile run to his fish. “That’ll take me a at least an hour, because what you have to understand is you can only run 12 to 13 mph even when the winds are reasonable,” he explains, making it obvious he’s done the math, and taken careful notes of his commute times.

“Guys will make 30 to 50 mile runs one direction to their fish if winds will allow in this tournament, but you have to judge you’re fishing time not only on how far, but on how slow you have to travel to get there,” he says.

As if discussion of extreme distances isn’t dramatic enough, McClelland punctuates the scary reality of big water by prepping for the worst. “I’ve packed an anchor with a 75’ rope on it, and removed ¾ of the tackle I’d normally carry, just in case the worst should happen, and I’d have to abandon my boat.”