A lotta things change in three decades, so Kevin VanDam is putting in long practice days on Ross Barnett in preparation for this week’s Bassmaster Elite presented by Academy Sports + Outdoors, because the only time

he fished the shallow reservoir previously was 32 years ago, at the age of 17.

“Back then, I was fishing team tournaments and B.A.S.S. Nation Series tournaments around home in Michigan, and my team partner Don Stevens and I qualified for an end-of-the-year tournament down here at Ross Barnett,” explains VanDam. “To be honest, I don’t even remember what trail it was.”

He may not remember what trail it was, but the southerly winds warming the air at Madison Landing boat ramp following a long day of practice seemed to spin sweet memories of 1985 at a rate equal to the revolutions the giant willow leaf blade was making beneath the swivel of the spinnerbait he was holding.

“Don and I called this spinnerbait blade combination “Pots & Pans” because those big blades clank on each other underwater and make a ton of noise like somebody banging pots and pans together,” remembers VanDam with a smile.

And in what would become a very telling tournament 32 years ago – the noisemaker worked. 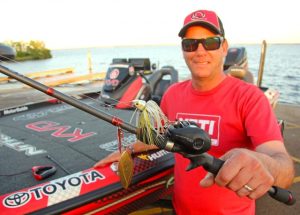 “I caught a 7-pounder from a beaver hut on a big-bladed spinnerbait just like this in that tournament, and that big fish is the one that landed us a Top 10 finish,” grins VanDam.

“Other than that, I really couldn’t remember much about this place before practice started Monday,” he admits.

“I mean heck, Don and I came down here from Michigan in an 18-foot boat with a 150 horsepower engine, and nobody had GPS mapping back then, so it was pretty intimidating to try and navigate and figure out where to fish among the massive lily pad fields and underwater stumps.”

Don Stevens has since retired, and spends his days shooting trap and skeet. VanDam has figured things out just fine – to the tune of $6 Million dollars in prize money, with hopes of adding to the sum this week where good memories chime like the big blades of a spinnerbait configuration that helped launch his amazing career.