Pre-game conversations at every Bassmaster Elite Series event inevitably turn to verbal wagers over what the â€œcut weightâ€ will be. In other words, how much will you have to catch the first two days of competition in order to place in the top half of the standings and be eligible to compete on Saturday? Apparently, it wonâ€™t take much on the Arkansas River this week.

Toyota Tundra driving pros Terry Scroggins, Marty Robinson and Casey Ashley chatted prior to the mandatory pre-tournament meeting and all agreed that fishing pressure, a larger than normal 15-inch minimum length requirement for largemouth bass, and the unpredictability of trafficking through the riverâ€™s lock and dam system would lead to far lower than normal Elite Series weights. 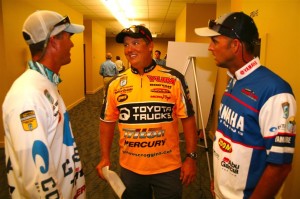 Casey Ashley, who won the most recent Elite Series event, spoke with confidence, but simultaneously offered a rather dismal outlook. â€œItâ€™s brutal. I feel like I can catch them, but itâ€™s brutal. Itâ€™s gonna be really, really tough to catch a limit of 15-inch keepers. Iâ€™ll predict if you can average seven pounds per day during the first two days that youâ€™ll make the cut.â€

BoatUS Angler â€œWeigh-to-Winâ€ member Marty Robinson predicts the cut line to be very near to what his roommate and good friend Casey predicts. â€œIâ€™m not sure most guys know for sure what they are capable of catching here because everybody was afraid to jerk on too many of them in practice. The fishing is too tough to set a hook and sting them. I did catch a 4-pounder on the second day of practice, and you can bet Iâ€™ll be high-fiving my Marshall if I catch one that big during the tournament. I think 15-pounds will take the lead on the first day, but youâ€™ll only need 15-pounds combined over the first two days to make the cut and fish on Saturday.â€

Current Toyota Tundra Bassmaster Angler of the Year points leader Terry Scroggins is barely, just barely, more optimistic than Ashley and Robinson. â€œThe whole deal with this river is that it fishes small and gets crowded. It wonâ€™t hold up to this much fishing pressure, especially not over three or four days. Plus, the lock and dam schedule will be a huge concern. Iâ€™m optimistic I can do well, but I doubt it takes more than 16-pounds over the first two days to make the cut. Fishing pressure and locks will have a lot to do with the final outcome here.â€

Itâ€™s hard to say how accurate the guesstimates of Ashley, Robinson and Scroggins are. But one thingâ€™s for sure, here in the blazing southern summer air along the banks of the seemingly stingy Arkansas, half this talented field could quickly be left out in the cold.