Prior to launch and over an egg muffin on Day 2 of the Evan Williams Bassmaster Elite Series tournament, Mike Iaconelli offered his perspective on the sometimes temperamental smallmouth that have made the St. Lawrence River a favorite fishery of he and many other pros.

Even though his home is 400 miles and a 7-hour drive in his Tundra from Waddington, NY, “Ike” has a long history on the St. Lawrence, dating back to the 1990s when he was fishing amateur Red Man tournaments.

“We’re 30 or 40 miles east of where we fished back then, and while it’s definitely tougher than two years ago when we were here in Waddington for the Elite Series tournament, this whole river still contains an awesome number of big smallmouth,” says Iaconelli, after hauling a 20-pound limit to the scales on Day 1.

“But, there’s a couple of big reasons why it’s tougher for a lot of guys this year,” he explained between bites of sausage, egg and cheese. 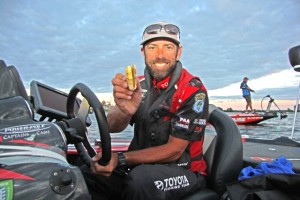 “First, we’ve had a cool summer, which lead to a later than normal spawn, so these fish are just now slowly making their way out deep, rather than bunched up in big post-spawn schools like we found here in August of 2013,” he explains. “That’s why guys could get 40 bites a day two years ago, versus this week, when we’re getting 10 or 12 bites a day. Yesterday, I only had 11 bites all day.”

“The other big factor is these fish are educated now – I’m not sure most of the fish in this stretch of the St. Lawrence had ever seen a lure prior to us coming here in 2013,” believes Iaconelli. “We showed people they lived here, and how to catch them, and that’s lead to these smallies being way more hesitant to be fooled by a lure.”

“They’re still here. This is a great fishery. You just have to work harder to catch them this year,” concludes Iaconelli.

Proof of his proclamation lives boldly accurate in the tournament standings. Each of the anglers in the Top 10 had at least a 20-pound limit, and while his Toyota teammate Terry “Big Show” Scroggins caught a very respectable 16-pound limit on Day 1, it was only good enough for a middle-of-the pack 51st place.