Somebody disconnected and stole the $80 extension cord Tommy Biffle was using to charge his boat batteries in preparation for the final day of practice while he slept Tuesday night. 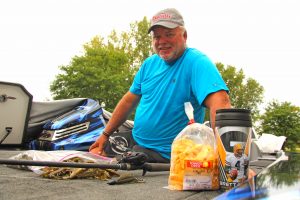 So the defending champion of this event stayed in the hotel parking lot Wednesday prepping tackle and graciously answering questions, instead of investigating the Mississippi River at La Crosse one more day, where he last claimed victory when the Bassmaster Elite Series last visited here in late June of 2013.

1.) You averaged 16 pounds a day when you won here in 2013, and smallmouth played a big part in your win. Todd Faircloth won the previous year with an average of 15 pounds of largemouth per day. What will the average winning weights be like this year, and will both species play a big factor?

I think the weights will be a little lower, and I can tell you that I’ve not found the big smallies so far in practice.

2.) What is the biggest difference in this fishery now versus three years ago?

They were biting better when we were here that June. I don’t think they’re biting as well since we’re here in September. Honestly, September is about the toughest month for bass fishing anywhere in America.

3.) What 4 lures do you think will get used the most this week, among the entire Elite Series field?

4.) In your opinion, what’s the biggest story of the brand new football season?

The Sooners getting beat in the first stinkin’ game of the year – but I don’t really get into football like a lot of people – I’m way more into watching hunting and fishing on TV than football.

5.) Your Quantum teammate Casey Ashley got accidentally stranded on a sandbar until well past midnight during practice Monday night. You love to fish ultra shallow. Have you ever been stranded that long?

Yep. Twice. Once at Lake Texoma up in the Red River arm, when I put a weigh-in bag over a push pole and waved it high in the air until a guy scouting for ducks in an airboat finally saw me after about 8 hours of sitting there, and came to tow me loose.

And then at Okeechobee, when I decided to zig around one side of an island, as everybody else zagged around the other side of the island up in the North end of the lake. I realize now why they all chose the other side of the island. It was so shallow my shoestrings weren’t even wet when I got out to push. An airboat finally pulled me off five hours later for $300, and the guy’s towrope broke twice before he finally got me free.