Bassmaster Elite Series Pro Shaw Grigsby has been a long time user of Lowrance fishfinders. But, like so many of the anglers who earn their living on tour, Grigsby, from Gainesville, Fla. has found the newest generation of HDS Units and the new Structure Scan feature to give him advantages on the water in competition. 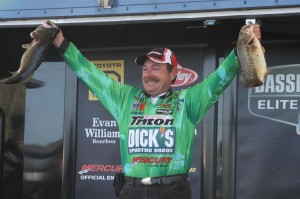 His B.A.S.S. tournament career began in 1977, and has seen him claim eight B.A.S.S. wins 16 trips to the Bassmaster Classic and $1,720,023 in career earnings. In his tournament career, and his long standing One More Cast television show, Grigsby has seen the evolution of sonar technology.

His experiences with the units have proven to him the value of the technology. His first experience that he can remember it making a major difference came during the 2010 Bassmaster Elite Series stop on Pickwick Lake in April of 2009. Grigsby, along with many of his competitors set up in the main channel below the Wilson Dam and battled the current in search of large schools of bass coming to and from their spawning beds.

The key to capitalizing on the waterway was being on your best stretches when the authorities would generate power. The power generation would cause the current to flow, stimulating the baitfish movement and the bass would respond by feeding.

Grigsby related that the bass at Pickwick were relating to isolated rock piles in the channel. The rock piles were very small and when they were viewed with the standard HDS screen, they appeared to be depth changes. However, once he used his Structure Scan they rock piles became evident on his screen. 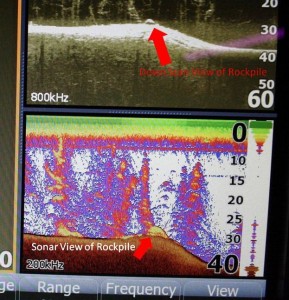 “The HDS with Structure Scan technology has made finding fish and structure so much easier in the river. When I looked at the lake bottom on standard sonar the rock piles just looked like nondescript rises in the bottom of the lake. Had I not turned on the Structure Scan I may not have even fished any of them at all because the standard view didn’t show me what was there.

Once I realized what they were, I started looking at them more closely, and I could see that these little one to two foot rock piles were providing the fish current breaks to hide behind. When bait would swim by, they could dart out and grab it and return to the safety of their rocks.

By making one or two passes through the area I could scroll my cursor to the individual piles on the screen and mark them with a waypoint. That saved me a lot of time in practice and the tournament because I didn’t have to be right on top of the rock piles to see the fish.

After locating the spots I wanted to fish, I could look at the distance I was away from the way point, then visualize a line on the target from the transducer at the back of my boat and make casts to them. If my waypoint was 50 feet to the left side at a 45-degree angle to the side of the boat, I could make the cast 60 feet past it and bring it back to rockpile.

I threw Strike King Football Jigs and Tour Grade Jigheads with finesse worms on them, and had I not known where I was casting to, I would have spent most of my day re-tying lures that I had lost on the bottom. Structure Scan made a huge difference in finding them, and the high definition screens really help me to see the separation of bottom targets and bass.” 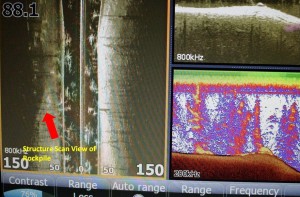 Grigsby caught 61 pounds, 13 ounces of largemouth and smallmouth bass from the isolated rock piles on Pickwick Lake over four days and finished the event in eight place, earning $12,500 in winnings in the process.