I said I was going to go out and find better fish to try and finish higher in my next team tournament, and it worked.

I fished a National Bass West team tournament with my friend John Perkins on Lake Havasu, and we finished in 2nd place. We still lost, but instead of 16 pounds, we caught 20.78 pounds and it was more where I wanted to be. Perkins caught a 5.51-pounder out of the back of the boat and that was a big help; he was on fire that day.

Speaking of five pounders, my partner in the WON Bass trail is John Weisfuss, a friend from high school. John gave me one of the funniest moments I’ve had in tournaments in a long time.

We had a decent limit and were looking for a big bite when John hooked up. He told me to get the net as his rod bowed over as he struggled with the heavy load. He fought and fought with it until it started to come towards the surface he started yelling “It’s gonna jump, it’s gonna jump!” When it came to the surface, we both realized it wasn’t a fish at all; it was a big five pound clump of weeds.

He kept saying that he “felt the bite.” But I just told him that I didn’t want him to keep having me net piles of grass for the rest of the day. It was really funny. I’m having a little fun, but Weisfuss is an old friend, and he got into fishing a few years ago, and he’s been steadily getting better, he even finished sixth in the U.S. Open last year.

I took my girlfriend Kirsten fishing with me the other day, and she caught a couple of really nice smallmouth including a five pounder. She doesn’t get out on the water with me too much because of her business, but it was fun to have her out there that day. 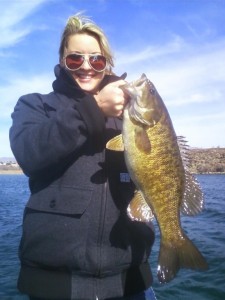 I’ve got another tournament with Perkins this weekend, an Angler’s Choice tournament on Havasu, and we’ll see if we can improve on what we did last weekend. It would be nice to win one of these.