Before I get too far ahead of myself; let’s do a little Bassmaster Classic wrap up. Because this is the first chat we’ve had since the big ol’ battle on the bayou happened; I’ll give my two cents worth.

It was a neat Classic. That’s it, there’s my two cents worth… I’m kidding. When have you ever known me to keep quiet about something? But, I digress. The tournament was amazing; everything we thought it could be, and then some.

Between the Classic and running around to Bass Pro Shops Spring Fishing Days appearances, I’ve been busy planning out the final two shoots of Zona’s Awesome Fishing Show. Okay, planning isn’t the word; I try not to plan anything. 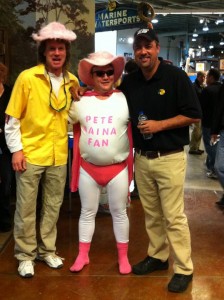 Seriously, ask the crew. They’ve been asking me where we’re going filming in a couple weeks, and I still don’t know. I like to keep ‘em guessing.
Now, I’m really excited about three things; the start of the Elite Series season, the rookie class in the Elite Series and dirt.

I’ll take them in order.

The Elite Series means I get to hang out with Tommy Sanders, who is one of the smartest guys, and also one of the biggest nut jobs I know. Trust me; I think if any of you saw what goes on behind the scenes with him, you’d agree that he’s partly to blame for me being the way that I am.

Seriously though, he’s a true professional and working with him never gets old.
As far as the rookies go, I think this could be the best rookie class we’ve ever had in the Elite Series. Thus far, the best class we had was in 2007 with guys like Derek Remitz, Casey Ashley, James Niggemeyer, and Jason Williamson.

This one could be better.

Andy Montgomery, Keith Combs, Ott Defoe make this a tough class, and then you throw in a little Johnny VanDam and Brandon Palaniuk and it could be good.

A word about Palaniuk; I think the kid is a breath of fresh air. He handled himself masterfully at the Classic, and for him to have the sense of marketing and presence he does after growing up in Idaho; which isn’t exactly the center of the bass fishing universe is amazing.

Anyway, on to the third reason I’m excited; dirt. You all think I’m a little out there, so I’ll assure you; I am. But, if you lived in Michigan, or most of the Midwest; you’d understand.

There’s an aroma in the air around here that just starts to arrive this time of year; and that is the aroma of dirt. When the snow starts to melt and the earth starts to break through; it means the fishing is going to get good.

Ask any Midwestern angler and they’ll tell you that they’ve had to break some ice to get on the water, but the fishing can be really good. I loathe winter,
I like summer, and the fall is alright (mainly because of Bear’s football) but, the spring really gets me sprung, and the smell of dirt tells me it’s here.

Ready to get your mind twisted? Visit Zona’s Awesome Fishing Show at www.markzona.com