Rewind
In 2007 the classic returned to Lay Lake, a familiar playing field in the heart of bass fishing country located just outside of Birmingham, Alabama. The result of this classic would signal the end of the “home state curse”, a long standing notion that an angler who shared his residence with the site of the classic was jinxed. If there was a chance to break the curse 2007 was surely it; eight of the fifty competitors listed their state of residence as Alabama. Coming into the tournament the odds on favorite was Russ Lane, a Lay Lake stalwart regarded by most locals as the man to beat in any tournament held on those waters. By eventual winner Boyd Duckett’s own omission, Lane was a much better angler on Lay Lake and had beaten Duckett there with regularity.

With a winning margin of six ounces, Boyd Duckett claimed the 2007 title relying on a pattern that targeted big fish, and big fish he caught. While many competitors targeted the more cooperative spotted bass, Duckett honed in on largemouth. The result was a day one giant weighing eight pounds and a crucial final day six pound nine oz kicker that sealed the deal.

The 2007 classic would transform Boyd Duckett from a virtually unknown to an entirely unforgettable angler. The classic was also of significance for the angler who didn’t win. Taking the old adage, “nobody remembers second,” to heart, Skeet Reese began a mission to become memorable. As what can best be described as the evolution of Reese from a great angler to a legendary one, Reese put the classic behind him and started his assault on the record books during the 2007 season. He finished the season with nine top ten’s of the fifteen total events he fished and in doing so won the angler of the year title.

The Winning Pattern:
During practice Boyd Duckett had found a steady bite throwing a lipless crankbait in approximately eight to ten feet of depth. He felt confident that with good patience he could catch a limit on the reaction bait, but he still considered that warmer weather would push some of the bigger fish up shallow. His local knowledge of the lake offered him a back up pattern of flipping dense grass mats for a big bite, but he hoped it wouldn’t be necessary.

Day one started out with Duckett scratching his head. His fish weren’t actively feeding in the eight to ten foot depths like they were in practice. With the cold weather of the first morning he slowly worked his way out into deeper water on secondary points. Finally, he started to catch fish in thirteen to fifteen feet and was relieved to put together a limit rather quickly once he figured this out. His limit was lacking a big fish so he put down his crankbait rod in favor of his flipping stick. Armed with 65 pound test, a one ounce tungsten weight, and Berkeley Chigger Craw Duckett picked apart heavy mats adjacent to spawning flats. He got only two bites during his estimated five hours flipping, but one of those was an eight pound fish that anchored his 19lb 14oz day one limit. After day one was all said and done, Duckett sat atop the leader board with nearly a two pound lead. 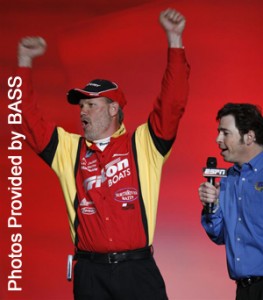 The second day was not nearly as productive for Duckett. He got his early limit employing the same pattern of a crawfish colored Rat-L-Trap in deeper water and then moved up shallow looking for big bites. He came across two such bites, but failed to land either one. Missed fish were not part of the game plan that Duckett had put together. He came to the scales with a very light bag of 10lbs 15oz and watched as he fell to fourth place. Day two belonged to Kevin VanDam. VanDam matched the 19lb 14oz bag that Duckett had weighed on day one and shot up the leader board to claim the top spot with only one day remaining. Known to be the ultimate closer, VanDam positioned himself nicely to win his third classic.

The final day commenced with the field cut down to 25 anglers. The top twelve anglers were separated by only five pounds and all could be considered to have a legitimate shot at capturing the title. Duckett stuck to his game plan and threw the Rat-L-Trap until he caught his limit at which time he moved back up shallow and started flipping. He set out to avenge his two lost bass from the day before and knew he needed a couple of big bites to catch up. While Duckett flipped mats, Skeet Reese made a charge for the title flipping the same bait in a much different area. Reese concentrated on wood that was in direct current. Each day he found the bass positioned a little differently, sometimes positioned directly into the current in front of the structure and at other times buried deep into the brush. With only an hour remaining Duckett made the flip that would win the classic. His bait plunged through a heavy mat of grass and was picked up by a 6lb 9oz kicker fish that sealed the deal. Duckett reminisces on that fish, “When I caught it, I thought, ‘I think I just won the Classic.’ I didn’t think about that for a long time, but I thought that fish probably made the difference. So after I caught it, I just concentrated on seeing if there might be one more fish and then about getting back on time.”

The final weigh in provided a lot of drama. Duckett’s weight of 17lbs 13oz put him in the hot seat on stage as he watched Skeet Reese pull out a quality bag of fish. Reese himself seemed a bit surprised by the size of his fish as he pulled them out of the livewell. As he approached the stage, he started calculating the weight he’d need and that’s when he started to consider the possibility he could win the classic. When the weight flashed across the screen Reese’s heart sunk; he had narrowly missed taking the lead by only six ounces. The only angler left was Kevin VanDam who couldn’t repeat his day two performance and weighed only 12lbs 5oz and crowning Boyd Duckett the 2007 Bassmaster Classic Champion.
2007 Bassmaster Classic Final Standings 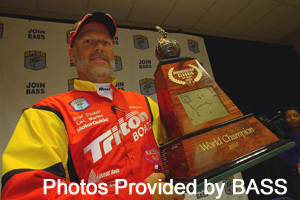 Wrap Up:
Duckett’s win changed his life forever, in his own words, “Winning the Classic changes everything. Nothing’s ever going to be the same. For one thing, it messed me up for the next few weeks. I said I wasn’t going to let it change anything, but I was naïve to think that. It brought all kinds of demands on my time, and it made it hard to get back into a rhythm. I was terrible at the next couple of tournaments. Then I had a pretty good tournament at Clear Lake, and after that I was awful again for a few weeks. It took awhile to get back into a groove.” 2007 proved to be a financial windfall for Duckett. Backing up his half a million dollar classic win, Duckett won the, now extinct, major event at Lake Dardanelle to the tune of a quarter million dollars and extending his winnings to $850,000 for the year. Not too bad for a guy who wasn’t even an afterthought before his breakthrough performance at the classic.