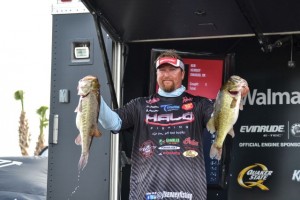 KISSIMMEE, Fla. (March 5, 2015) – Mercury pro J.T. Kenney of Palm Bay, Florida, brought a five-bass limit to the scale Thursday weighing 29 pounds, 14 ounces to vault to the top of the leaderboard on day one of the Walmart FLW Tour at Lake Toho presented by Mercury. Kenney will hold a 1-pound, 13-ounce lead heading into day two of the four-day event, hosted by Experience Kissimmee and the Osceola County Department of Tourism, that features 154 of the best bass-fishing anglers in the world competing for a top cash award of up to $125,000.

“I put a lot of work in here to get ready for this tournament,” said Kenney, an eight-time Forrest Wood Cup qualifier who has career earnings of more than $1.2 million in FLW competition. “I came over here every day for two weeks prior to the lake going off-limits and I found as many places that I could that looked perfect. I had different areas for all different wind directions and conditions. I was looking for specific spots.

“Then, in our official practice period, I never used a hook,” Kenney continued. “I would make a cast, feel a big one hit my bait, then mark my waypoint. I have color-coded waypoints all over based on how big the fish are. I really put a lot of time and effort into this event.”

The hard work seems to be paying off for Kenney, as he managed to catch his entire limit of bass out of only one of his areas today.

“My area that I went in today was my biggest, and I just went in and beat it up,” Kenney said. “There were seven red waypoints in there and I caught six of them. I had the seventh on, but she shook off and got spooked. I caught every fish that was in there by 11 a.m. today, so I’m not going back.

“I’ve got eight more spots to go to. I don’t think any of those are as big or as good as my area today, so from here on out I’m going to be running around a lot more. I’m going to be fishing very specific areas.”

Although he is known on the FLW Tour for his prowess with a big flipping stick, Kenney said that he was casting to catch his fish today, not flipping.

“I’ve played this game long enough to know that everything could go downhill really fast,” Kenney went on to say. “But, I’ve got fish to go to. I’ve done my work.”

Right behind Kenney in second-place is legendary angler Stacy King of Reeds Spring, Missouri, who weighed in five bass for 28 pounds, 1 ounce. King was forced to withdraw from the Tour last season after being diagnosed with throat cancer and has endured multiple treatments to battle back and return to the FLW Tour this year.

The top 10 pros after day one on Lake Toho are:

Lehew won the Bridgford Big Bass Award on the pro side Thursday with a bass weighing 9 pounds, 11 ounces to win the $500 prize.

Fans will also be treated to the FLW Expo on Saturday and Sunday from noon to 4 p.m. at Big Toho Marina prior to the final weigh-ins. The Expo includes a Ranger boat simulator, the opportunity to interact with professional anglers, enjoy interactive games, activities and giveaways provided by sponsors, and learn more about the sport of fishing and other outdoor activities. All activities are free and open to the public.

In conjunction with the FLW Expo, the FLW “Get Outdoors. Go Fish!” Youth Fishing Derby will also be held at Big Toho Marina on Saturday from noon – 3 p.m. The derby is free and open to area youth 15 years of age and younger. FLW Tour pros who are not one of the top 20 anglers that make the Buck Knives Cut will be on hand to assist the youth. Pros Rich Dalbey and Todd Hollowell’s “Hooked on Helping” foundation will also be hosting a food drive to benefit the Second Harvest Food Bank of Central Florida. FLW fans who donate five or more cans of food will be entered to win a $50 Walmart gift card.