Winning any title on the tour level can be a challenging experience. For a rookie on the FLW Tour, learning to do something as simple as competing can be more than challenging, it can be downright crushing.

When you’re faced with some of the best bass fishing professionals in all the world, learning to compete at their level can be a daunting task. Every year on professional tours new crop of anglers enters the fray with their hopes and dreams set on becoming 1 of the best in the business. 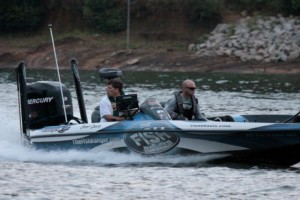 In 2012 on the FLW Tour that crop included angler many would have guessed would become the best of his class. That anger’s name was Jacob wheeler. With the BFL all American title under his belt, wheeler seemed to be the sure bet to win the Rookie of the Year award.

However, another angler had also set his sights on becoming the rookie of the year, and that angler was Clent Davis.

Davis, from Montevallo, Ala., set his goal at the beginning of the year to not only earn the Rookie of the Year title, but also to qualify for the Forrest Wood Cup on Lake Lanier in his first year on tour. Not only was Davis in the field at Lake Lanier for the 2012 Forrest Wood Cup, but he was also to hoist the trophy he had set out to win when he started his campaign.

Decision to Go Pro
Davis started his FLW career as so many others do, on the Co-Angler side of the ledger. He started fishing in the FLW Collegiate ranks, then sought the experience as a Co-Angler to help him get his feet wet on the tour level.

“I found myself getting frustrated more than I did learning,” he said. “I’d often find myself second guessing the guy in the front of the boat. So, I decided that, if I had other thoughts about how to be successful, then I should be making my own decisions; I decided to turn pro.”

After two events in the FLW Tour Opens as a Co-Angler, he decided to try his hand at the pro division in the Lake Guntersville event won by Paul Elias. He finished the event in 37th place, collected a paycheck of more than $10,000 and decided to make the change permanent.

But, with any business venture, there are bound to be rough patches, and he found out that there could be in his first event of the 2012 season.

Rocky Start
When the 2012 FLW Tour Majors season started, Davis, like so many of his competitors hoped to get off to a great start. However, when a middle of the road finish in 74th place ended up next to his name, he knew he needed to make some adjustments.

“I tried to force a bite that I wasn’t accustomed to because I thought that it would be the winning pattern,” he said. “What I learned instead was that I need to fish how I’m comfortable if I want to consistently do well.”

Armed with a commitment to getting back to his fishing strengths, Davis started to perform better. “I really went back to tossing crankbaits and a B&M Swim Jig,” he said. “Growing up around here means power fishing, and I really turned myself around by getting back to my roots.”

He followed with a 10th place finish at Table Rock, a 36th at Beaver Lake, an 11th at the Potomac River a 20th at Kentucky Lake and struggled at Champlain, but his 91st place finish was enough to sew up his Rookie of the Year crown, and find him in 14th place in the FLW Tour Angler of the Year standings. 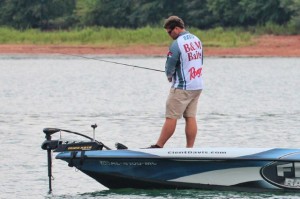 “It really was a good year,” said Davis. “I really needed to have a decent year financially in order to keep going. If I didn’t cash enough checks, it could have been a one year and out thing, so I’m happy with the year.”

Future Plans
As for the future, Davis wed his fiancée Ashley in early September, and the pair plans on continuing down the road towards being a family built around the career of a professional angler. “This is all I’ve event wanted to do,” said Davis. “From the time I was in high school, I knew this was my career choice, so we’ll keep working on it.”

He said that he plans to pursue additional partners with his newfound position as the FLW Tour Rookie of the Year. “I need to get busy developing other partners for this career to work,” he said. “I’ve got great partners in The Fish Ranger and B&M Baits, and I’ve recently added Halo Fishing to my lineup, but to really be able to do this right, I’ll have to keep working at it.”

Whatever the case going forward, you can be sure that Davis will be standing there as the 2013 season gets underway at Lake Okeechobee in February. Armed with a season full of lessons learned and successes earned, he certainly has given himself a shot at building a career in bass fishing.