I call the Christmas break my summer vacation, and it’s almost over. It’s time to strap on the helmet and go.

I’ve got several sports shows lined up end to end, and a bunch of Bass Pro Shops in store promotions that I’ll be doing here, and that signifies the start of the busy season. Over the next couple of months I’ll do my best to stay focused on ZAFS, but the Classic usually grabs my attention; it is the really big deal in our sport.

Before I can get out in the public and relate to the people, I’m hooking the Z9 up tomorrow and heading out for some filming of Zona’s Awesome Fishing Show. I’m on my way to Louisiana to film some shows before we head down there for the Classic. Aside from the fact that I love fishing the Louisiana Delta, I’m also looking forward to being somewhere warmer than six-degrees. 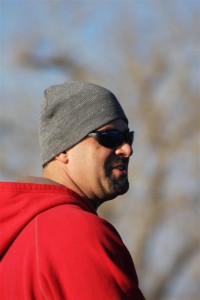 Speaking of trying to stay focused, my ADD is really kicking in, I’m trying to “plan” our filming for the trip but as usual, I’m more or less winging it. My approach usually ends up with the type of show I like, but it can be a real nightmare for planning.

I’ll film a couple of shows in the swamp, and no they won’t be guest appearances on “Swamp People;” especially because Greg Hackney can’t go on the water there until official practice.

Zona’s Awesome Fishing Show premiered on the Outdoor Channel on New Year’s Eve, and I’ve been flattered by the feedback I’ve received from people about the show, it’s been really humbling to hear what everyone loved about it.

We’ve got some great shows coming up on ZAFS to follow the premier episode. I go fishing with Jeff Kriet and try to help rehab him from his 2010 Classic loss. I’ve also got a show in the lineup with Aaron Martens, which is totally self explanatory.

I will say this about Aaron; I’m truly in awe of the way he fishes. Partly because of how much I love light line fishing myself, but also because of his attention to detail and how natural he is in his craft. The scary thing is, I actually understand much of what he says, the rest is above my head.

The bottom line about all of our shows is that I never quite know what the hell is going to happen; some are going to be good, and a few will wind up being dogs, but I try to avoid as many of those as I can.

That’s the nice thing about doing The Bassmasters with Tommy Sanders, he makes all of them good.

I’ll be talking with you next time from the soft water of the south, I’m done with ice fishing for a while, I’m getting to be too old to be digging holes in the ice.

To find out more about Mark Zona – If you can handle it – visit: www.markzona.com