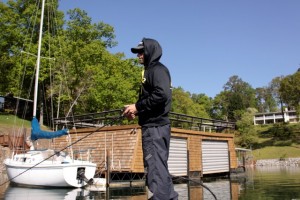 This is the time of the year that gets certain anglers all pumped up for a day of fishing.  The overnight air temperatures sometimes dip into the high 40’s in many areas of the country, and while the afternoons can still be in the high 70’s or low 80’s, things are changing.

Anglers usually start their days layered with cool weather gear on top and hoodies underneath; it can be a magical time of the year.  While anglers go from raingear for warmth in the morning to shorts and flip flops in the afternoon, the fish are on the move as well.

Cooling water temperatures signal the imminence of winter and shad begin the hunt for food in the shallows looking for running water and plentiful plankton ahead of the cold weather.  Bass do the same and the object of their attention is those shad that are moving into the creeks.

“I love this time of the year,” said Salem, Va. Elite Series pro John Crews.  “There is so much baitfish activity in the shallows that an angler with the right approach can really do some damage in water that is two feet deep or less.”

To many anglers that means topwater, spinnerbaits or lipless crankbaits.  To Crews, it means a chance to use one of his favorite 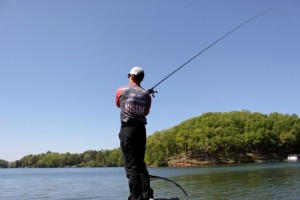 super shallow tools; a crankbait.  He loves the approach so much that he worked with SPRO to build a bait that would allow him to use a crankbait in skinny water efficiently.

“Squarebills are excellent baits, but they have issues in super skinny water,” he said.  “If they dive deeper than two feet, we spend a bunch of time picking leaves and gunk off of our hooks.  We can adjust that by increasing our line diameter, but that reduces the effectiveness.  That’s why we built the Baby Fat John 50; it’s the perfect tool for this approach.”

What to Look For

While bass relate to certain cover items for most of the year, in the fall, they relate to the clouds of baitfish that scurry around in the creeks.  Crews sais his first objective is to look for creeks that have a lot of activity.  “I want to see baitfish rippling the surface and if I see swirls from gamefish taking swipes at them, even better,” he said.  “When I see that kind of activity, I pick up my crankbait rod and cover water waiting for bass to take a swipe at my Baby Fat John.” 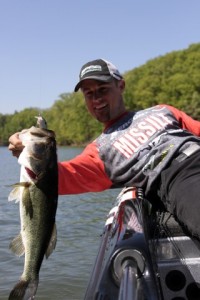 He said he tends to focus his efforts on the shallow, or flat side of the creeks this time of the year.  “In the spring, we look on the deeper side of creeks looking for channel bends where bass congregate while moving in to spawn,” he said.  “in the fall, shad seem to spend much of their time around the flats and shallow bars, so that is where I target my presentations.”

Skinny Crank Components
Crews uses the same gear that he would when throwing squarebills and flatsides in the spring.  he chooses a 7′ Pinnacle Perfecta DHC5  squarebill rod because it has a light tip for casting and hooksetting, and a parabolic bend for helping to hold on when the fish takes aggressive swipes at the lure.  He pairs the rod with a 6.4:1 Pinnacle Optimus LTE which he spools with 14-pound-test Vicious Ultimate Copolymer fishing line.

“I like to have a little bit of stretch when I am shallow cranking, so I use copolymer instead of fluorocarbon,” he said.  “I also like to use the lightest line I can get away with because it is easier to cast and really helps the lure come to life; which is critical to getting bites this time of the year.”

He built the Baby Fat John 50 to have what he calls a wandering action in the retrieve.  What squarebills are famous for is having the ability to “wander” or “hunt” off center during the retrieve which gives them the illusion of being alive.  “This bait truly has the most hunting action of any squarebill bait I’ve thrown,” he said.  “It seems to go off center as much as two or three inches before coming back to center.  To me, that looks like a shad that is wary of its surroundings and looking to avoid danger; it really draws strikes.” 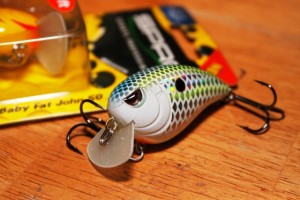 He said he chooses shad type colors in the fall; saying that it only makes sense to try and mimic something that bass are actively targeting. “I’m really fond of two of our new colors lately,” he said.  “I like Citrus Nasty in semi stained water and higher skies and Chartreuse Black Lightning in dirtier water or darker skies.”

Ideal Conditions
Crews said he likes to find creeks that have shallow flats in the rear section of the creek with isolated cover such as laydown logs or stumps in them.  he said he prefers the water to have at least a stained color to it, if not slightly on the dirty side.  He also prefers there to be at least a light breeze; something to break up the surface. 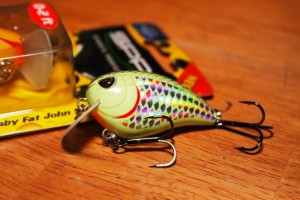 “If I can find all of those things, then I can start to pinpoint where bass should be hiding in wait for a school of shad to come darting by,” he said.  “I will often make multiple presentations to those isolated targets because sometimes a bass is so keyed in to the abundance of food in his area that it may take a while for him to see the lure and respond to it.  If there is very little cover then I will merely fan cast the flats looking for those aggressive fish that are chasing the shad around the pocket.

“I’ve always loved crankbaits, and this gives me the alternative to throwing lipless crankbaits in the fall.  The Baby Fat John 50 allows me to cover the water more effectively, and helps me land more of those fish that bite,” he said.  It’s a great way to catch numbers of bass in the fall.”