If youâ€™ve read Skeetâ€™s Beat over the past couple of years youâ€™ve learned that Iâ€™m an IZOD Indy Car Series fan. Through my career in fishing, I met several people who are associated with the Indy Car Series, Kim and I have been to the Indianapolis 500 and the race here at Infineon Raceway at Sears Point several times.

I have many friends that work on the Series and for teams that race the Series, and the crash at Las Vegas and the eventual passing of Dan Wheldon really struck me hard. I didnâ€™t know Wheldon very well, but many of my friends do, and they are all really struggling with his passing.

From what I know of him, Wheldon was very popular amongst everyone at the track; he was very well liked and respected as a driver. I feel really terrible for his wife and kids; he and his wife had two sons, and I canâ€™t help but really look at my house with Kim and our two daughters; it really makes you think.

The whole Indy family lost a great friend and talent Sunday, but more importantly, a family lost a husband and father, and my heart goes out to them. 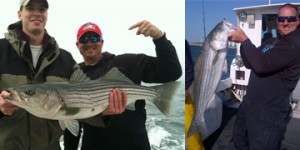 I took a whole crew of friends from Wright & McGill Co. / Eagle Claw and TroKar to Boston last week for a striper / bluefish outing on the Atlantic. The Northeast part of the country is known for their striper fishing and we were looking for some of those big ones that the area is known to produce.

We didnâ€™t catch any true giants, but Tenny Mount, the VP of Marketing at Wright & McGill Co. caught one that pushed 40 pounds; which was the biggest of the trip. The rest of u caught a lot of 20 to 25 pounders and a bunch of bluefish.

Iâ€™d say that we probably caught 50 striper and more than a hundred bluefish. Those bluefish have teeth and they really chew through line. We probably went through more than 100 Eagle Claw treble hooks loaded with cut bait that day. They had no problem biting through 40 to 50-pound-test monofilament leaders, but we couldnâ€™t go to steel because the stripers wouldnâ€™t bite then.

We were supposed to be there at a really bad time for the striper bite. Everyone was saying that the striper bite was long past prime, but our guide; Captain Chuck DiStefano from www.bostonsportfishing.com said that heâ€™d take care of us, and he did. Heâ€™s a true salty dog, and he knew how to put us on the fish, and he really did a great job of it. We had a great time, caught a lot of fish and had a lot of fun doing it.

Iâ€™m getting ready to take the winner of Lowranceâ€™s Day on the Lake with Skeet contest at Clear Lake tomorrow, and Iâ€™ll give you a full report next week. If I remember, Iâ€™ll even snap a few pictures of us along the way to share with you too.