As can happen in a winter Bassmaster Classic unseasonably cold weather had hit the south, and Alabama was no exception.  By the end of this edition of the Bassmaster Classic, coontail grass in Beeswax Creek, cramped conditions with six of the top 10 competitors using the tributary, and the fact they were largely throwing lipless crankbaits would become known.

Kevin VanDam would surprise the field by peeling around at takeoff, and heading into the back of Beeswax Creek.  He would pass the rest of the field, go under the bridge and into the pocket in the back that featured a flat and a ditch that ran through it.

“My strategy actually dates back to the 2007 Classic that was on Lay Lake,” said VanDam.  “I told Mark Zona then that if the weather stayed cold, I was going to win.  But, we got a warming trend 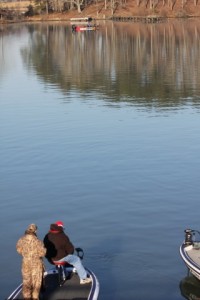 and the fish began to move.”

VanDam fished Beeswax Creek in the 2007 Classic, and the area produced his 3rd place finish then.  Knowing the area held fish, but hearing that the launch site for the 2010 event was being moved to Beeswax Creek gave him moment to pause, but after careful consideration, he chose to practice there.

Practice
“I waited for everyone to clear out of the area and went to the back of the creek,” he said of what would eventually become his honey hole.  “What I found was that the conditions were very similar to when we started practice there in 2007.  The water temperature was 38 to 39 degrees, and there was some color to it.”

What he also found in the back of Beeswax Creek was full of Gizzard Shad that were dying off due to the cold conditions.  “They were everywhere,” he said.  “They were lethargic and swimming around slowly trying to stay alive, and you could see bass come up and take them off the surface.”

With that combination, and his previous knowledge of the creek, VanDam checked the one stretch of the creek that he knew to be prime.  “I caught an eight, a seven and a six pounder there in 2007,” he said.  “When I caught a four and a half pounder on a Gold Sexy Shad colored Red Eye Shad and hooked another good one; I knew the conditions were right.”

He made a couple of passes with his Humminbird 1197c SI Side Imaging unit, found the key features he would need to target and used the cursor to mark the waypoints on the screen, and went on his way.  “The Humminbird made it more efficient, because I could see things on the screen, move the cursor to where they were and waypoint it without moving the boat,” he said.  “It meant I could cover the water faster and practice with purpose.”

The remainder of his practice was spent looking for other areas.  “I covered the lake end to end two times in practice,” he said.  “With the main lake being muddy, I knew I would have to focus on the creeks, and with the cold conditions staying, Beeswax was the choice.”

His reason for settling on Beeswax again was because of the surroundings.  “Beeswax had the best habitat with the existing cover, and the coontail,” he said.  “Plus, it had channels and drains that the fish would get in during the cold conditions; mix all of that together with abundant, dying shad, and I had a winning area.” 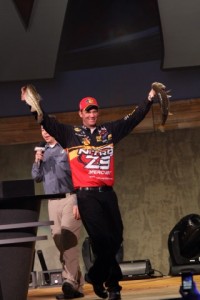 Kevin VanDam on a Classic – photo by Dan O’Sullivan

Day One
On the first morning of the event, VanDam surprised many of his competitors, the media and spectators when; as the first boat out, he idled to the end of the spectator boats, spun a U-turn and headed to the back of Beeswax Creek.  “I was fishing almost immediately, and it didn’t take too long to tell that things had come together,” he said.  “I culled a 14 and a 15-pound limit on my way to 19 pounds, 8 ounces (which put him in the lead after day one).  After that, I kind of stayed in the area protecting it, and looking for more in the area; I probably caught 25 fish that day.”

Day Two
On day two, the field was greeted by water levels that had fallen 10 to 12 inches, and VanDam could tell a difference. “The area looked like it had turned over, the falling water pulled slime off the bottom, and the fish kind of scattered into the grass,” he said.  “I had to work a little harder that day, but as the water temperature climbed in the afternoon, I was able to get to my final weight of 12 pounds, 7 ounces (placing him in 2nd place).”

Day Three
He knew things had changed for the better on the third day of the tournament, when he arrived at his spot.  “The water level had risen a couple of inches, but it was also warmer than the previous two days,” he said.  “It was 46.8 degrees that morning, within a half an hour I caught a five pounder that was fat and fresh, like it had just moved in; I knew it was going to be a good day.”

He produced a 19-pound, 7-ounce limit to overtake his competitors and win by five pounds with 51 pounds, 6 ounces; in the process, claiming his third Classic trophy and the $500,000 payday.

Wrap Up
While it may look it at times, VanDam is anything but random.  His approach in the back of Beeswax Creek was precise, every cast aimed at his final destination of victory.  Everything from why he 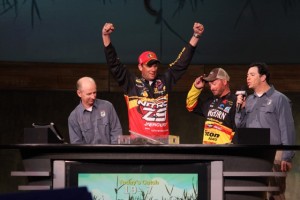 chose the location, his choice of lure, to the equipment he chose to throw it on were for a specific purpose.

“I practiced the tournament with the future in mind,” he said.  “So many anglers get caught up looking for where the fish are, instead of locating where they will be in three days.  The back of

Beeswax had a channel in it that the fish would get in the center of overnight in the cold.”

But, as the days progressed and water temps warmed, the solid cover features and coontail grass on the flats would give the bass a place to hide as they filtered into the flat.  “They would hide around specific types of areas, and they had to be a combination of things, usually hard cover mixed with the grass initially, and then the grass as things warmed further,” he said.  “Because of the surroundings, I felt that more of the fish the other competitors were targeting would be coming to me; it really was a perfect scenario, and it played out.”

VanDam sought to mimic the action and color of the dying Gizzard Shad with his Gold Sexy Shad Red Eye Shad, and in doing so he chose his equipment carefully.  “I prefer the seven-foot e-glass composite Quantum Tour KVD rod when throwing the Red Eye Shad,” said VanDam.  “I matched it with my new Tour KVD baitcasting reel with the 5.4:1 retrieve speed for a specific reason; my reels were spooled with 17-pound-test Bass Pro Shops XPS fluorocarbon mainly, but did have to use 20-pound on the flats when the water was low on day two.” 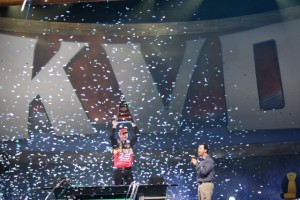 One other equipment adjustment he made was to change the factory hooks on the Red Eye Shad to Mustad KVD Elite Triple Grip Trebles.  “That hook is designed for use with low stretch lines like fluorocarbon,” he said.  “It’s  made with 1X strong wire so it won’t straighten, and it has a 2X short shank so I can upsize my hooks without tangling.  In the case of my ½-ounce Red Eye Shad, I can put two number two hooks on it, which dramatically improves my hook to land ratio.”

The equipment allowed VanDam to make repeated casts mimicking the dying shad.  “I wanted my Red Eye Shad to slowly swim around and flutter like the shad that were dying,” he said.  “I would allow the slower speed reel to keep the bait in the strike zone longer, and when I came into contact with the grass or cover, I would pop it free allowing it to flutter; which is what the Red Eye Shad was designed to do.”  Strikes would come anywhere throughout his retrieve.

VanDam’s plan at the 2010 Bassmaster Classic was seen as a masterful strategy and his plan was executed as only KVD seems to be able to do with such frequency.